7/22/19: Hamilton
What: The London run of a super obscure Broadway musical that you probably haven't heard of.
And? My seventh time (yes, I deserve to be hated). I am pleased to report that this show remains absolutely wonderful, though it gets fewer laughs throughout in the UK than in the US (except King George, whom they adore). The cast was great (especially Tarinn Callender, officially my favorite Hercules Mulligan), and the production is tight, high energy, and as thrilling and heartbreaking as one could want. King George's question to America, "Do you know how hard it is to lead?" felt very uh well ... apropos, if we look at where we are.

7/2319: The Woman in Black
What: The long-running two hander adaptation of Susan Hill's novel, about an aging man who enlists the help of a young actor to tell the story of his haunted past.
And? Sure I've seen it like six times. What's your point? Scariest time I've had in a theater, and I adore the amazing storytelling achieved by just two actors and a wicker chest full of props. 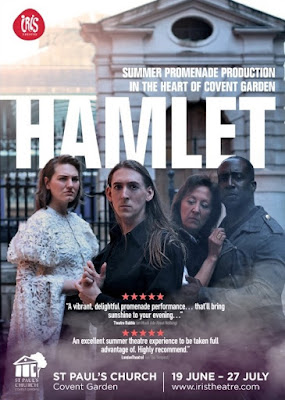 Read more »
Posted by Zelda Knapp at 3:55 AM No comments:

7/13/19: Fiddler on the Roof
a repeat visit (family in town). We were extremely lucky, as this was one of the few shows to not have to cancel its performance due to Saturday night's midtown blackout. We had a couple understudies, including marvelous performances from Bruce Sabath and Adam B. Shapiro as Tevye and Leyzer-Volf, respectively. We also had an understudy Fiddler who, unlike Lauren Jeanne Thomas, was unfortunately not playing the fiddle live. This might not have bothered me (the Fiddler usually mimes the playing in other productions), had I not seen the usual Fiddler who does play live, and had the Fiddler not been standing next to a live clarinet player and cymbal player during the nightmare.

7/14/19: The Mountains Look Different
What: Mint Theater's production of Micheal mac Liammoir's play about an Irish woman whose marriage to the son of a farmer returns her to Ireland after thirteen years in London, a potentially devastating secret in tow.
And? Not really for me.

Posted by Zelda Knapp at 8:38 AM No comments:

the performance of Secret Life of Bees I was supposed to see on 7/05/19 was cancelled due to actor illness (I'm seeing it in a few weeks instead), so as a reward for us all, you get 3.1 paragraphs on Moulin Rouge!

7/03/19: Moulin Rouge!
What: The new musical adaptation of Baz Luhrmann's 2001 hit film, about a penniless composer, Christian, who is lured into the Moulin Rouge and falls in love with its sparkling diamond, Satine.
And? I've been wrestling with how to write my reaction to this, partly because it's as varied and eclectic as the show and source film, and partly because I think there's a longer piece I could write about this at some point. Act One is wonderful, full of the excess and charged energy that thrills through the film, a mix of numbers used in the film (don't worry, "Lady Marmalade" and "Nature Boy" are still there) and new ones chosen (including a gorgeous mash-up of "Shut Up and Dance" and "Raise Your Glass," and a revised "Elephant Love Medley" that nails its spot as the Act One finale). Act Two falls apart a bit for me (which I at least had braced myself for, as bookwriter John Logan often fails to stick the landing with his theatrical work); Satine's illness is barely telegraphed in the first act, so its sudden appearance as a deux ex kill-the-girl (or consumption ex machina, per Duncan Pflaster) toward the end feels more shoe-horned than it needs to be, and the lovers' reunion doesn't reach the full ecstasy required for her final exit to land as it should. The show instead saves that ecstasy for an extended encore/curtain call, so that the audience still leaves happy.

I've been trying to think back to what appealed to me about the film, as well as how I think it appealed similarly and differently to those who were not-me. It traffics a lot in familiar music--but familiar only to some, as most of the film score was new to me. I know I responded to the aesthetic of excess in it (it's part of what I love in Great Comet as well), as well as the earnest idealism, and I responded to the love story. Here with the show, the music nostalgia is a new mix: songs I now associate fondly with the film, new songs (some of which I know, some of which I don't), and the love story is differently painted. Gone is the Orpheus myth that infused so much of the film, gone is the Duke as an ineffectual fop (Tam Mutu brings an appealing menace to his new take on the role), gone is much resemblance to the real life Toulouse-Lautrec (though Sahr Ngaujah is a beautifully realized weathered bohemian who bears the same name and some of the same artistic bent). And at least for me, gone is a chunk of my investment in the love story. This isn't Orpheus anymore; it's a story of the club, and of some players within it (this distinction is made especially clear when the aesthetic of the Moulin Rouge takes over a private moment between Christian and Satine, elevating it Baz-style), and that hurts the emotional weight of the second half.

But with all that, we also have a perfectly-cast Aaron Tveit as Christian, golden-throated heartthrob that he is; we have Karen Olivo, every inch a star in a more actualized Satine (though her accent work is spotty); we have a marvelously lush Moulin Rouge recreated in the Hirschfeld Theater (yes, we've got the elephant and the windmill, thank you Derek McLane), presided over by the wonderful Danny Burstein, in his element as the seedy but benevolent Zidler; we have stunningly visceral choreography by Sonya Tayeh, and a sense of immersion reminiscent of both the frenetic cinematography of the film and of Broadway's recent Great Comet.

I loved the first half. I think the book fell short in the second half. But man oh man, what a ride.