Margin Notes: The Ghost, a weaving 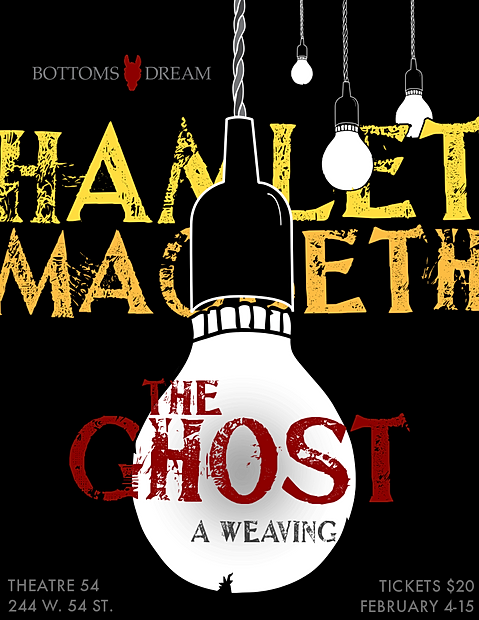 The Ghost, a weaving


Plot and Background
Bottoms Dream is an NY-based theatre company dedicated to reinventing classic texts. This production is the second in their Weaving series, following The Dream, which wove Romeo and Juliet and A Midsummer Night's Dream. This production weaves together Hamlet and Macbeth, utilizing the language and story of both plays to construct a new hybrid narrative, shading new colors onto certain characters. So here, Macbeth's struggle and narrative are laid on Claudius's shoulders, while Hamlet acquires the surname Macduff and all that that entails. Polonius and her offspring, meanwhile, carry the last name Banquo, and so provide a double threat to Claudius Macbeth. The plot, while shuffling around dialogue and subplots, is still largely faithful the core of both of its source plays - a soldier kills his king and brother to acquire throne and wife and, in his paranoia, begins knocking off anyone else he sees as a threat. Hamlet, meanwhile, is infirm of purpose but wants justice for his father's death.


What I Knew Beforehand
Mostly I knew that Bottoms Dream had begun exploring these Shakespearean interweavings, and that this - a weaving of Hamlet and Macbeth - is their second venture in that regard. Beyond that, I've studied both Ham and Mac (we're on nickname terms) numerous times, seen multiple productions of both, and have done scene work on both plays in the past.

Play: What a clever idea. Honestly, I wasn't quite sure what to expect - though I'd been warned not to exert too much energy focusing on where each line came from, and rather to pay attention to the story being told now, there was still some delight to be had in that game: to hear a familiar line, removed from context, turn into something entirely new (My two biggest - and most embarrassing - laughs were R&G's drunken toast, which turned out to be Polonius's brevity/mad speech, and the greeting of sisters Ophelia and Laertes - "Where have you been, sister?" // "Killing swine."). While the narrative in large part seemed to alternate which source play was taking dominance, the most compelling moments were often the moments of true weaving - such as the dual soliloquies of Claudius and Gertrude, taken from Macbeth, as they psyche themselves up for killing Duncan, Gertrude's husband; or the (noticing a pattern here?) dual soliloquies of these two again, at an empty banquet table, both consumed by guilt for what they have done, wondering, with the text from Hamlet, "May one be pardon'd and retain the offense?" The other fascinating element at play is how the new context for seemingly-familiar characters, sheds new - and often horrifying - light on them. Gertrude not only married her husband's killer, she helped in the killing; R&G, no longer incompetent lackeys, assist in scheming on both sides - performing in Hamlet's Mousetrap, but also serving as Macbeth's murderers to take out Polonius Banquo. In this narrative, no one's hands are clean (though Hamlet's are cleaner than usual) and no one, with the stink of death and tragedy coming from all directions, is safe.


Cast: The cast was largely competent with the language, which is always a relief, while not uniformly compelling with delivery, and a few of them had some physical habits that hindered rather than aided the story being told. Standouts, however, included Joann Sacco as Gertrude, who had more than her share of Lady M at play, and was a rich balance of Machiavellian rationalization and guilty mother; and John Hardin and Matthew Castleman as Rosencrantz and Guildenstern, a pair of deadpan clowns who seemed up for anything - a drunken wedding toast, a bit of spying, a bit of play-acting, and - yes - a spot or two of murder. As I remarked to my friend at intermission, "Rosencrantz is dark, yo."

Design: Angstrom's set was simple but well-used. Surrounded on all sides by audience, the playing space was by necessity intimate, with the primary piece being a claw-footed bathtub on an elevated platform. The tub had a somewhat fluid purpose, if you'll forgive the phrasing, and was sometimes used to a fantastic effect, and sometimes to an ambiguous one. It never fully detracted from the moment at hand when it was the latter, but it did distract a bit. His lighting design, meanwhile, featured hanging bare bulbs whose height the actors could manipulate, supplemented by standard theatrical lighting. The hanging bulbs were powerful and flexible tools, serving as a small fire in one scene, or two frames of self-torturing soliloquies in another, but I found myself too often straining to see an actor's expression in the shadows, so I did crave a bit more even coverage across the space. The music was a mix of pre-recorded ambiance by Nick Bombicino and red-shrouded drums placed through the theatre's perimeter, and played by the ensemble to color particular moments of tension or manipulation. This, coupled with the whispered chorus that often took on the voice of the supernatural in the narrative, was powerful and haunting.