10/30/19: Seared
What: MCC presents Theresa Rebeck's new play about a temperamental chef in a boutique Brooklyn restaurant, on the verge of hitting the big time.
And? Sadly, like most of Rebeck's work, the play itself is a bit thin. It's not incompetent, but it's not compelling, and it never sticks to the ribs. Still, Moritz Von Stuelpnagel does a marvelous job directing the eye in this fast-paced kitchen, and I know they brought in actual consultants to teach the actors how to properly cook (or at least appear to properly cook) all the meals plated during the show. The big draw for me with this show was Raul Esparza as Harry the chef, and he did not disappoint. It's always immensely satisfying to watch someone do something really well, and with this performance we had Harry as master of his kitchen, and Esparza as master of his acting. We also had the wonderful W. Tre Davis as the restaurant's waiter/sous chef, and who ultimately had the most interesting character journey of the show. Is this a must-see? By no means. But it won't ruin your life.


11/01/19: An Enchanted April
What: A musical adaptation of Elizabeth von Arnim's novel about four women from different backgrounds who agree to share the rental of a villa in Tuscany for the month of April.
And? While it is always thrilling to hear a company of actors sing beautifully and unmiked, this is a largely forgetting and unengaging affair. 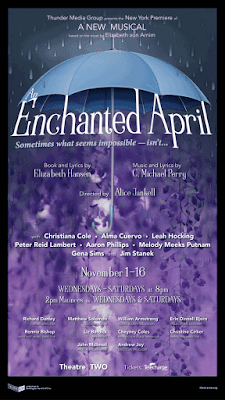 11/03/19: Harry Potter and the  Cursed Child, Parts One and Two
a repeat visit. still magical. still a weak script, but still so magical.