The Best Theater of 2013 (in my own humble whatever) 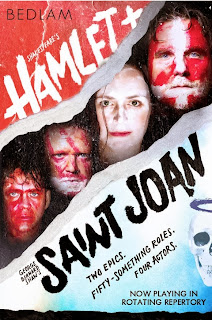 Well, the year is winding down, which means retrospections are in order. As a self-proclaimed theater junkie, I try to see as much theater as I can manage, time- and funds-wise. And this year I've been extraordinarily lucky. I went through my calendar and programs, and - not counting any repeats, like the fact that I saw Natasha, Pierre, and the Great Comet of 1812 three times, by the end of 2013 I will have seen 122 different plays/musicals/theatrical whatnots. 122. That means that, on average, every three days I saw a new show. You guys.

So I'm pretty pleased with myself, I'm not gonna lie to you. And I saw a lot of good theater. A LOT. Some thrilling, some heartbreaking, some hilarious, some huge spectacles, and some small intimate affairs. Boiling down the list to my favorites was very, very hard. First I took out any production that had premiered prior to 2013. That helped ... eliminate 10 shows. All right, then I really got to work. I couldn't include every amazing show, or good-enough shows that had amazing moments in them. But these listed below were the top shows that really blew me away, in one way or another.

Jesus, BC: Re-Gift of the Magi

As the lights dim, our friendly voiceover asks us the age-old question - What would Jesus do? And he answers, "He would turn off his cell phone." And thus we are thrown back to the days of the early New Testament - with more than a hint of modern flavor thrown in. Jesus may have grown up in the single digits of recorded years AD, but Joshua - a sweet-faced 28-year-old southern messiah - is a man for all times.

As directed by Greg Cicchino, Magi has the air of a traveling troupe of players: an economic basic set with drawn-on clay bricks and interchangeable clapboard backgrounds - changed by the players themselves - hosts the five actors playing thirteen characters, all in brightly-colored costumes by Samantha Newby. And with tongues firmly planted in cheek, our players make more than one anachronistic nod in pretty much every direction. The story follows Joshua in his wandering years - after losing his job, he decides to seek out the three magi who witnessed his birth, meeting along the way the Prodigal Son, a Pretty Good Shepherd - with a pretty good lamb puppet - and a Roman Tax Collector (all three played by Steven Bidwell, for the record). With each new person he meets, Joshua grows in wisdom and understanding, trying to help all he can, even in his naivete. The story climaxes when he, with two of the magi backing him up, finally locates the third magus's widow. There he must reconcile with the consequences of his existence, as his birth and Gaspard's search for him have wrought nothing but tragedy upon Gaspard's wife. As his story concludes, Joshua is able to return each of his gifts to its original magus - myrrh to Melchior, frankincense to Gaspard's widow, and gold to Balthazar for his daughter's dowry. And as Joshua returns home to Galilee, tired but wiser, he goes with his cousin John the Baptist down to the River Jordan, to begin ... well, the Gospels.

Read more »
Posted by Zelda Knapp at 1:14 AM No comments: