a repeat visit (friends in town)
Posted by Zelda Knapp at 6:17 PM No comments:

Weekly Margin 2019, W20: Ain't Too Proud: The Life and Times of The Temptations, Little Women

5/17/19: Ain't Too Proud: The Life and Times of The Temptations
What: The title basically covers it.
And? Watching this show was a very similar experience to watching Jersey Boys for me, for the following reasons (besides the obvious, that it's a bio/jukebox musical about a legendary music group):

5/18/19: Little Women
What: Kate Hamill's latest adaptation presented by Primary Stages, of the classic Louisa May Alcott novel about the March sisters.
And? It was fine, if a bit inert, with a weird dichotomy of seeming to rush through story beats while also going slowly. I think part of this was caused by the scene changes, which would have benefited from the guidance of a choreographer, to activate the redressing of the space, and pair it more specifically with the music. Strong performances from Kristolyn Lloyd (Jo) and Paola Sanchez Abreu (Beth), and a beautiful use of the recurring motif of Beth demanding a real story from Jo. 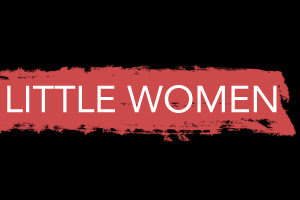 Posted by Zelda Knapp at 8:22 AM No comments:

Weekly Margin 2019, W19: Burn This, Ink, Frankie and Johnny in the Clair de Lune, All My Sons, High Button Shoes

5/07/19: Burn This
What: The second major NYC revival of Lanford Wilson's play about the many shapes of grief after a sudden loss.
And? Lanford Wilson is a playwright who's had a big impact on me, and I was excited to see a major revival of one of his plays, especially as it's one I've only read. This was a fairly decent production, though it didn't solve the puzzle the play has always had for me: why does she find Pale so appealing when he's so terribly awful so much of the time? What is it in him that is speaking to her? That aside, I thought it was very well directed and well paced, with great sound and scenic design (*glares angrily at the mess that is Sam Gold's King Lear*), and Brandon Uranowitz was absolute scene-stealing perfection as Larry, and I'm so glad he got a Tony nom for this.

5/08/19: Ink
What: A transfer from the West End: James Graham's play about the first year of Rupert Murdoch's ownership of the British tabloid The Sun, and his collaboration with editor Larry Lamb.
And? Terrific theater. Great rhythm, great staging, GREAT design, sharp writing, and a good cast anchored by Bertie Carvel and Jonny Lee Miller. It was interesting watching this, and thinking about how differently it must have played for a UK audience, where they're more familiar with The Sun, as well as with the real people portrayed in the play (I'd only heard of Murdoch, but none of the others). That being said, it still plays well here, just with less of the Greek tragedy element, of everyone watching knowing where this all is going. Pointed references toward the end, of Murdoch's support for this up-and-comer Margaret Thatcher, or his intention to go into television in the U.S., resonated more with our crowd, however. I was surprised, ultimately, at how sympathetically both Murdoch and Lamb were portrayed, the doubts and hesitations they had along the way. I suppose the point is no one starts out a monster; but we see the choices they make, and how monstrous they can become.

5/04/19: Ruffled Feathers
What: The brilliant Beth Slack's solo cabaret act.
And? Call me biased because Beth's my friend, but she was so good!!! Beth has a beautiful soprano and a hilarious and twisted sense of humor, both of which she brings to play in her solo show (or "single woman show," as her mother reportedly calls it) about the crisis of turning forty and the expectations she had had about this milestone in her life. This of course yields renditions of songs like "Stars and the Moon," "Old Maid," and "When I Grow Up," as well as "Green Finch and Linnet Bird," "Forget About the [Bird]" (there was a bird motif), and "Out There." I laughed so much my cheeks ached, I cried multiple times, and I was so damn proud of my friend and what she made (all of the patter stringing together the songs was great, too). I can't wait to see what she does next. 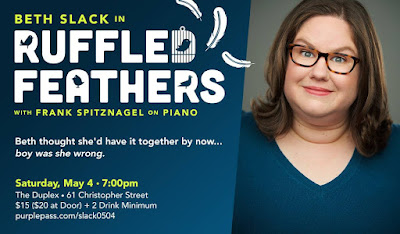