6/19/18: Girls & Boys
What: An import from The West End's Royal Court Theatre, Dennis Kelly's Girls & Boys is a one woman show, split between an audience-address monologue and memories of raising her children at home. An exploration of family, self-knowledge, and the nature of violence.
And? Absolutely incredible performance from Carey Mulligan - it seemed less a performance and more a real person speaking to us. The marriage of Es Devlin's set design and Luke Halls's video design was elegant and stunning, a beautiful physicalization of the Woman's journey. Kelly's script is well-built and well-directed by Lyndsey Turner.

6/20/18: Little Rock
What: A play with music about The Little Rock Nine, nine black teenagers who broke segregation at Little Rock Central High School in Arkansas. Per the program note, the play is "based on research, numerous testimonials, and interviews conducted over a 13-year period."
And? The cast wasn't bad, but the script had the subtlety of an anvil. This was such an important moment in our country's pockmarked history of race relations and discrimination, and I wanted something more out of it than a pedestrian series of scenes explaining the conflict.

6/12/18: Teenage Dick
What: Playwright Mike Lew adapts Richard III to a high school council election. Jointly produced by The Public Theater, Ma-Yi Theater Company, and originally commissioned and developed by The Apothetae, Teenage Dick aims for an inclusive and diverse experience, with a cast composed of two actors with disabilities, three actors of color, and only one performer who doesn't readily read as an "other" (as in, there is one actor who is able-bodied, white, and male).
And? This was a cool idea, and it had a few really strong moments, some sparks of genius. But too often, I found myself cringing at the jokes or the lack of nuance. The dramaturg's note says that "monsters are not born, they are made"; this is not the story I saw in Teenage Dick. He started off in Machiavelli Land, had a crisis of conscience, and then leaned back into the ends justifying the means. This play could be piercing and powerful, but it's not there yet. And while it's great to finally start seeing representation for performers with disabilities, I could wish them a better vehicle than this.

6/13/18: The Great Leap
What: Eighteen years after American basketball coach Saul taught Wen Chang how to coach China's fledgling team, the two meet again for a rematch - which unfortunately coincides with the Tiananmen Square Massacre on June 4, 1989. Manford, an aspiring Chinese American point guard, is desperate to join Saul's team in time for the rematch in Beijing. Playwright Lauren Yee wrote this partially inspired by her father's own short-lived basketball career in San Francisco.
And? This is terrific. Fantastic cast (seriously, BD Wong. But also Tony Aidan Vo and Ali Ahn and Ned Eisenberg - they are all marvelous), tight storytelling, a well-crafted and compelling narrative that metes out its revelations with a nuanced eye. The climax of the play, the basketball game itself, is riveting. Well worth a visit.

Posted by Zelda Knapp at 8:24 AM No comments:

The Shakespeare Forum, which I've written about several times, achieved this year a long-held dream of its Artistic Director and Co-Founder, Tyler Moss: the El Barrio Shakespeare Festival running from May 31st to June 16th. The festival is framed around Forum's production of Lear, but also includes student presentations, special classes and workshops, and more. It's ambitious and impressive, and represents the many facets of what Forum does and wants to do.

My participation in this festival was sadly (but joyfully) limited to two events: Seeing Lear and performing in an encore presentation of our all-female staged reading of Rosencrantz & Guildenstern Are Dead (with some of the players shuffled around).

6/07/18: Lear
What: King Lear, aging and (unbeknownst) slipping into dementia, divides his kingdom among his daughters, seeking a sort of royal retirement. Sabotage, subterfuge, and disguises, along with the ever-quickening disintegration of Lear's mind, lead to wrack and ruin for nearly everyone touched by Lear. Under Sybille Bruun-Moss's direction, the role of Lear is shared across the entire cast.
And? I've always been a big fan of form and content conversing in a meaningful way, and this is especially true when a production has a "gimmick" of some sort (think: Deaf West's Spring Awakening, where the inability of the adults to communicate clearly with the children is mirrored against the Deaf and the hearing communities' similar difficulties). The splintering of the role of Lear among all the players here is not only a reinforcement of one of the tenets of Forum (you're not barred from playing any role in the canon, and the most important thing you can bring to that role is your own unique self), but a visceral exploration of what it means to have dementia - how changeable and unpredictable your personality can be. So we can have Denny Desmarais's heartbreakingly lost Lear asking audience members if he is Lear, Antonio Disla's furiously hurt Lear, railing at his daughters for knocking his legs out from under him, Melody Lam's joyfully childlike Lear attentively listening to the ramblings of Poor Tom, and Adam Goodman and Alenka Kraigher's despondent and bitterly laughing Lears when finally reunited with the banished Cordelia. All these disparate parts culminate in a gutting coup de theatre that is simultaneously shocking and inevitable.

I will say that sometimes this device, which is indicated in the program, but not made immediately explicit in the production, does result in some lack of clarity, particularly in the first half of the play (some of the cutting down to a two-hour run time also contributes to confusion). However, I still found myself profoundly moved by this production and this cast, staged with casual grace by Bruun-Moss (and assistant director Gwenevere Sisco). And I haven't even mentioned Tyler Moss's witty and unforgiving Fool, Frankie DiCiaccio's delicate Cordelia, or Harry Waller's insecure Regan yet. But there's not a weak link in this cast, and it's yet another particularly Forum production which I am grateful to have witnessed. 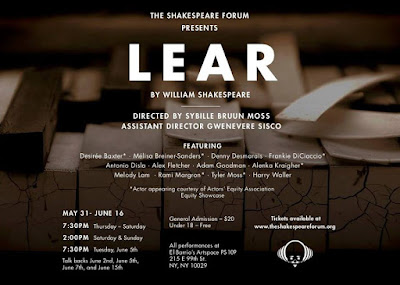 6/10/18: Rosencrantz & Guildenstern Are Dead
What: Tom Stoppard's debut play, about two minor characters from Hamlet trying desperately to make sense of the scraps of plot they're given, while flipping coins which always seem to come up heads. We presented a staged reading of this about two years ago, and were asked by Forum to bring it back for an encore presentation in their Festival, with a few shuffled players in the parts.
And? This is one of my favorite plays, and Guildenstern is one of my favorite parts I've gotten to play. This second go around was an interesting variation on the first, with some added stressors and anxieties, but came with an amazing group of women that I am so lucky to have worked with. On a personal level, I particularly appreciated how, with Erin Keskeny's Rosencrantz as opposed to Kelly Zekas's, I couldn't let myself fall into the patterns of the first time; as Rosencrantz has changed, so too must Guildenstern. The performance, like last time, was once again thrilling and joyous, and I was so moved to be surrounded by such a supportive audience. I have so much admiration for the five women I performed with, and it was an honor to share the space with them, to see them be amazing.

Posted by Zelda Knapp at 8:46 AM No comments:

So I have a theory. Our beloved Hamilton was a bit of a tsunami on the Broadway scene. The show delayed its advancement to Broadway from its run at the Public, thus leaving space for Fun Home to claim the Tony Award for Best Musical in 2015; with plenty of warning, many shows delayed their arrival on Broadway to a post-Hamilton season, which explains how overstuffed last season was, and why so many shows felt left out in the cold come awards season. Now, the tide's flowing back out and we've got an emptier season. And, at least for the Spring half of it, a bit of a disappointing one. I can't say I came at this list with particularly strong feelings, either for the frontrunners or underdogs, but I will be interested to see what triumphs come June 10th.

With the caveats that I'm not going to see The Iceman Cometh because of my vow to not sacrifice any more of my time to the words of Eugene O'Neill, and that I haven't yet managed to score tickets to either Mean Girls or Harry Potter and the Controversial Fanfic, let's get started.