8/17/18: Collective Rage: A Play in 5 Betties
What: The play's full title, per the poster and playbill, is Collective Rage: A Play in 5 Betties; In essence, a queer and occasionally hazardous exploration; do you remember when you were in middle school and you read about Shackleton and how he explored the Antarctic?; imagine the Antarctic as a pussy and it's sort of like that. This long conversational title is a good clue to the additive and irreverent storytelling style of Jen Silverman's play. Five women, all named Betty, and connected daisy-chain style to each other, come together to create a devised theater piece inspired by the Pyramus and Thisbe play-within-a-play of A Midsummer Night's Dream, and discover themselves in the process.
And? I don't quite know how to talk about this show but I will say that I was delighted. I'll also say that while what I wrote above could technically be the plot, it's not really what the show is about. It eschews traditionally plot beats, but gives instead a collection of scenes, strange and earnest, silly and absurd, of the Betties interacting, discovering themselves. I think if you're a big theater nerd like me, you'll adore this, too. Protip: above the playing space are projected the scene title names, which stack their clauses until they're as long as the play's full title. Sitting in the second row, I had difficulty tipping my head up and catching everything, so I'd recommend sitting a bit farther back. 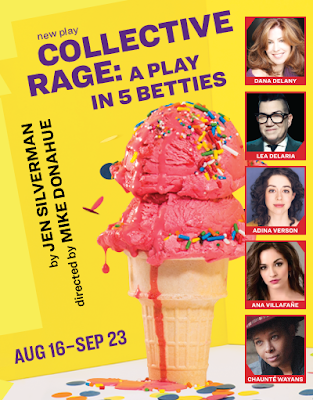 8/03/18: Surfacing
What: Part of the Planet Connections Theatre Festivity, Surfacing is about surviving damage, whether inwardly or outwardly inflicted, and the connections made and broken on that journey. Marissa may have survived her suicide attempt, but with a metal rod holding her hip together and a sense of humor so dark she can't see a helping hand in front of her face, she's got a long road ahead of her before happiness is a possibility. When her sister, who's come to live with her through her recovery, convinces her to give Tinder a try, they both find some unexpected results.
And? Having worked with both playwright Mike Poblete and director Daniella Caggiano before, I was psyched to get to see their collaboration, and I was not disappointed. Poblete's writing is full of so many surprises, both hilarious and poignant (Marissa, a painter, talks about the pain of being able to see forever but not being able to be in it). Caggiano directs the performers with a sure but delicate hand, letting the quiet moments breathe, and not backing down from the intensity of confrontation. All four actors are wonderful, and the show is performed well within the limitations of a festival setting (I believe they had less than half an hour to transition from the show prior): I can only imagine how much richer this will be with full production.

Posted by Zelda Knapp at 9:47 AM No comments: