8/26/21: The Last of the Love Letters
What: Atlantic Theater Company presents a new epistolary play by Ngozi Anyanwu about two people at the end of something, unable to finally say goodbye.
And? Honestly, I'm not really sure what to make of the structure or the conclusion of this play. The first section seems wholly disconnected from the second. While both yield strong solo performances from playwright Anyanwu and her costar Daniel J. Watts, I remain unclear just what the playwright or director intended for the audience to leave with. 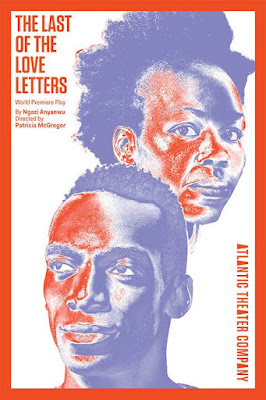 Streaming Theater Related Content I Watched This Week
Posted by Zelda Knapp at 8:30 AM No comments:

8/07/21: Pass Over
What: Lincoln Center's Broadway transfer (and indeed the first Broadway show to perform since the shutdown) of Antoinette Chinonye Nwandu's powerful three-hander about Moses and Kitch, two Black men on a sidewalk planning to escape their circumstances.
And? I adored this play when I saw it Off-Broadway, and was so thrilled when the transfer was announced. The three actors are extraordinary (award nominations for Smallwood and Hill please!), and the expansion of Wilson Chin's scenic design is breathtaking. Playwright Nwandu has rewritten aspects of the play, particularly its conclusion, to reflect the change in dialogue in the States about violence against Black bodies over the past few years. Beyond that, I don't want to delve too deeply into spoiler territory, so I'll just say I'm so glad this play and playwright and production exist, and I think when they publish the script it would be fascinating to publish the different versions that have received major productions (the Steppenwolf run/Spike Lee film, the Off-Broadway run, and the Broadway run). Someone better credentialed than me could write a compelling article about that journey.
Posted by Zelda Knapp at 9:00 AM No comments:

7/29/21: Edges
What: Chance Theater presents Pasek and Paul's first collaboration, a song cycle written when they were 19.
And? I'm trying to keep the "they were only 19" dominant in my head because the writing in this show isn't there yet (wasn't there yet? tense is weird). It has strong vibes of wanting to be Songs For a New World without actually reaching those heights (there's even a semi-"Stars and the Moon" song in the last third). Too many of the songs lack a journey--they're catchy and tuneful, but they don't go anywhere new between the first and last verses. So, that aside: yes, I cried as soon as I sat down, in my first time in an indoor theater since March 11, 2020. The four performers have good voices, and Tyler Marshall and Elizabeth Curtin especially have great timing and physicality throughout, doing the most work to build an arc to the songs they sing. Bradley Kaye's scenic design is an appealing abstract space for the different songs to exist, and director James Michael McHale makes good use of the thrust space, playing to three sides without neglecting sections. There is some work done by McHale and costume designer Christina Perez to create throughlines for suggestions of characters (connecting songs out of the vacuum to be some sort of arc), but this work is so uneven and unbalanced (much more work has been done to build arcs for the women than the men, with any arc for Jewell Holloway treated more as an afterthought than any sort of plan). If this show is aspiring to be a new SFANW, this is another place it misses the mark: SFANW trusts its audience to do the work of building an emotional arc for the four performers and doesn't try to superimpose anything on top of the individual songs. I felt, watching, that I was being asked to either forgive the slight mismatches that resulted in joining up different songs to the same character, or allow myself to acknowledge that the lack of specificity of voice in the lyrics--more common in pop music than in musical theater--is what they're counting on. Still, I was happy to be back in a theater and hear songs sung live, right in front of me. That was huge.
Streaming Theater Related Content I Watched
Theater Developments
The Broadway League is requiring all Broadway audiences to show proof of full vaccination.
Posted by Zelda Knapp at 8:00 AM No comments: