Weekly Margin, 2018 W4: The Undertaking, Miles for Mary, In the Body of the World

1/24/18: The Undertaking
What: The Civilians' founder, writer-director Steve Cosson, interviewed a variety of figures - a philosopher, an artist, a cancer survivor, and a woman who momentarily died - and assembled a multimedia two-actor dialogue exploring these perspectives, as well as the bounds of the artifice of theater, while he himself goes on his own undertaking to confront his fears connected with death and loss.
And? I really liked this one, you guys. The two actors, Aysan Celik and Dan Domingues, are excellent, imbuing each character (including the play's auteur) with such natural and understated humanity that each seems like the way they must always stand, speak, think, as opposed to one of several roles in only eighty minutes. I found the interweaving of the various perspectives on death with the ongoing dialogue between Steve and Rita compelling and engaging (and now I really want to see Cocteau's Orpheus), and the ideas explored stayed in my mind such that I went home and wrote a story about a child's rudimentary engagement with death. Definitely worth catching.

1/25/18: Miles for Mary
What: In the gym room of a high school in Garrison, Ohio in 1988-1989, five teachers (with a sixth on speakerphone) plan an upcoming annual fundraising telethon.
And? Honestly, this just wasn't for me. It was well-acted and an adept demonstration of passive aggressive negotiation, but not something that I ever got into. Several of my friends were raving about it, though, so this is just one Zelda's opinion.

1/10/18: Hansbury & Slack
What: Brian Hansbury and Beth Slack perform an improvised hour-long musical based on a suggestion from the audience, exploring an important moment in someone's life.
And? These two (three if you count their pianist Jody Shelton - and you should) consistently blow me away with their talent, humor, and heart. This particular rendition of a couple anticipating the birth of their child while Ocean's 11 plays on the television was both touching and hilarious. 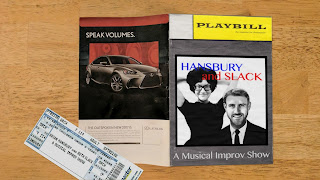 1/12/18: Improvised Shakespeare
What: A troupe of five players improvise a ninety-minute play in iambic pentameter (ish), based on a suggestion from the audience, using familiar Shakepearean tropes, style, and structure.
And? These guys are absolutely phenomenal and I don't know how they do what they do. "The Globe and the Shell" was hilarious, weird, bloody, and full of weasels. 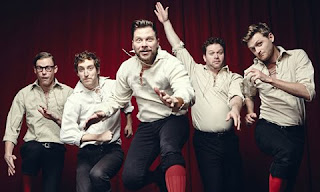 1/13/18: Cardinal
What: Young mayor Jeff gets persuaded by former classmate Lydia into painting downtown red, in the hopes of putting their small town on the map, revitalizing outside interest, and boosting commerce. When the outside interest comes in the form of a bus tour full of made-up stories, they have to decide if what they love is the town or those who inhabits it.
And? I think whatever message playwright Greg Pierce was trying to convey was muddied at best. It is a good question, but there's a lot of excess noise, to the degree that I ultimately didn't know why we were here. (I also got a bit annoyed by the set design, but it's a bit of a petty rant that would probably be appreciated only by my fellow PHTS alum) 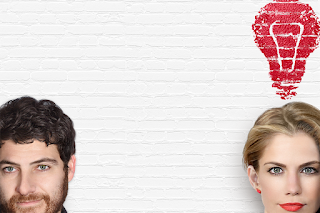 Posted by Zelda Knapp at 9:03 AM No comments:

1/2/18: John Lithgow: Stories By Heart
What: A one-man show in which John Lithgow shares two of his favorites from a short story anthology prized by his family, framed by connected anecdotes from his life.
And? An excellent vehicle for Lithgow's talents as a storyteller. I was more engaged by the first act, where he enacted Ring Lardner's "Haircut," which had some good pantomime in addition to the charisma of the conversational style, even as the story got nasty. The second act, featuring P.G. Wodehouse's "Uncle Fred Flits By," was funny though less compelling to me in its content; however, he framed it well within his family's story.

1/5/18: Mary Shelley's Frankenstein
What: A deconstruction of Mary Shelley's classic, interspersing the journey of the creature with Shelley's grief at losing her children to illness and miscarriage. The performance is a mix of text and scene with live music, aria, and dance.
And? Meh. Neither the creature's story nor Mary Shelley's were interestingly told. Redeemed only by Robert Fairchild's dancing (The Monster) and the live music provided by Krysty Swann (Mezzo-Soprano), Steven Lin (Piano), Parker Ramsay (Organ/Harpsichord), and Kemp Jernigan (Oboe).