Weekly Margin 2019, W4: The Other Josh Cohen, Harry Potter and the Cursed Child, Parts One and Two

1/23/19: The Other Josh Cohen
What: Narrator Josh tells the story of Josh Cohen one year ago, when his apartment got robbed, everything hit the lowest point it could hit, and then a surprise boon arrived in the mail. Starring and co-written by two Peter and the Starcatcher alum, David Rossmer and Steve Rosen.
And? Adorable, silly, and with a good heart. The perfect example of an enjoyable Off-Broadway musical, with pleasant, catchy songs, a versatile ensemble, and two engaging authors/stars.


1/27/19: Harry Potter and the Cursed Child, Parts One and Two
What: A two-part theatrical sequel to a little-known British book series.
And? Whatever you've heard about the show is probably true. There are definitely writing problems abounding--character inconsistency or total lack of any character work at all (with the exception of Harry Potter and Scorpius Malfoy, performed excellently by Jamie Parker and Anthony Boyle, respectively), a story that might not know who or what it's about if you asked it, and a contrivance here or there to get us where we need to be--which explains why people who have read the script but not seen the production object so strongly to it. But guys, seeing it? It's fucking magical. At the end of each part of the show, as you leave the theater, they hand out buttons printed with "#KeepTheSecrets" and I do want to respect that, especially as the secrets most worth keeping (and most worth experiencing without spoilers) are more in the staging and production than necessarily in the plot (which has been spoiled left, right, and twice on Sundays). So I'm not going to delve into specifics of what they do or how they do it, but damn, guys. Our seats were up in the balcony (third tier of the theater), which frankly are excellent seats for how this show is done. You get the full scope and scale of the thing, the rake and angles are well-built so there's no partial view action. Sure, you can't see the sweat beading on their foreheads, but you can see everything else. They've renovated the entire theater, so I fully recommend taking a stroll through the various levels of the lobby before settling into your comfortable seat. And then watch the magic. Because it's fucking magical. It's so thrilling to see artists and craftspeople working at the top of their game, and that's what we're getting from this Tony-winning creative team (seriously, one of the best lighting designs I've seen on Broadway).

Posted by Zelda Knapp at 8:04 AM No comments:

1/16/19: Blue Ridge
What: In a halfway house in North Carolina, a wrench is thrown into the recovery of several residents when walking disaster (and sometimes violent) Alison moves in.
And? After thinking about it a few days, I still don't know what the title has to do with the content of the play, beyond indicating the region. However, I mostly appreciated the play itself, even if it did seem to go off the rails narratively as it went on. Fantastic performances by all, especially the always wonderful Marin Ireland, and the rising star Kristoyn Lloyd.

Weekly Margin 2019, W2: To Kill a Mockingbird, Fabulation, or the Re-Education of Undine, Choir Boy

1/09/19: To Kill a Mockingbird
A repeat visit with a friend. We were in the front row (which ended up being slightly partial view during the trial scenes due to scenic design/staging), and it was a treat to get a close look at the nuances of performance, especially when it wasn't a character meant to be in focus. I was particularly taken with Shona Tucker, who with no lines emulated fully crafted character work, as both a spectator at the trial and as Mrs. Henry Dubose's much put-upon maid (she also understudies Calpurnia), as well as Thomas Michael Hammond's Bailiff (he also understudies both Atticus Finch and the prosecuting attorney Horace Gilmer). I still have issues with some elements of the adaptation (particularly the fact that it's no longer Scout's story or journey; she's there to tell Atticus's journey), but it's a moving piece of theater.

1/10/19: Fabulation, or the Re-Education of Undine
What: Undine, a powerful PR entrepreneur who reinvented herself after college to remove any traces of her "ghetto" upbringing, must return home to her Brooklyn family when her con artist husband leaves her penniless and pregnant. Over the course of her gestation, she must reckon with the the lies she's told others and herself, and recognize what happiness can look like.
And? Glad I caught this before it closed. Fantastic performances, funny and moving, and a delightful showcase for the versatile cast as well as Montana Levi Blanco's costume design.

1/03/19: True West
What: Roundabout's revival of Sam Shepherd's play about two brothers--one a transient small-potatoes thief, the other a screenwriter--whose rivalry and estrangement come to a boil.
And? I was pretty bored by the show (but I've never really gotten Sam Shepard). Paul Dano was great, Ethan Hawke was better than expected. The set design was pretty good, but the lighting design employed a device I've been seeing a lot lately that I'm not too kicked on (a proscenium frame of lights that glare brightly between scenes to shrink the audience's pupils, to cover the set transitions). That device worked for me for The Father because it seemed to feed, and be fed off, the content of the story; I didn't see any form/content matching here.


1/06/19: Improvised Shakespeare
What: A troupe of five players improvise a ninety-minute play in iambic pentameter (ish), based on a suggestion from the audience, using familiar Shakespearean tropes, style, and structure.
And? Another absolute delight, complete with a scene of badly-accented French soldiers hatching a plan in rhyme, an impression contest, way too many babies, and more in Laying An Egg. 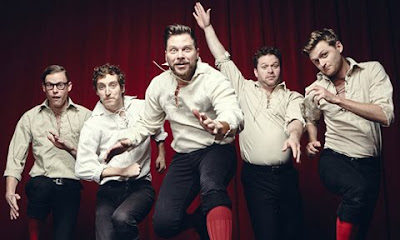 Posted by Zelda Knapp at 8:29 AM No comments: