Plot and Background
A two-person, 55-minute deconstruction of Shakespeare's tragedy Macbeth, presented by DE-CRUIT, a veteran-founded theater company dedicated to "treating trauma through Shakespeare." Macbeth tells the story of a nobleman just back from battle who hears a prophecy that he will be king and, with the collaboration of his wife, plots first to make that prophecy a reality, and then to remove any obstacles to keeping his stolen crown. Husband and wife are both ultimately destroyed by guilt over their actions and (in the source play) by the enemies they have created along the way.

What I Knew Beforehand
I knew that it would be a very physical production, exploring trauma within the trappings of Macbeth, a play I'm pretty familiar with.

Thoughts:
Play: I regret that this review is coming out too late to actually help bring a wider audience to the production, but I am grateful I was able to see it before the run ended. Overall I would call this a mixed success. Stephan Wolfert and Dawn Stern, the DE-CRUIT founders who are both creators and performers of this piece, bring a cogent understanding of the source text as well as a clear idea of how they want to extrapolate it to explore different kinds of trauma and trauma responses. While Macbeth is shaken first from battle atrocities and then the murders he himself commits, Lady Macbeth is haunted more by the loss of their infant child, though her complicity in Duncan's death does also contribute to her ultimate unraveling. The performance opens with a movement piece that establishes both characters' trauma motifs--he gasping at some horrific sight and sinking as she holds him, then crawling across the floor; she heaving and panting until finally the stillborn birth is taken from her--before shifting into text. The script focuses chiefly on dialogs between Macbeth and Lady Macbeth or between Macbeth and Banquo (Stern playing both Lady M and Banquo), with dialog from other scenes and characters sometimes reassigned to the married couple to keep to the plot beats. Most compelling within this structure are the witches' prophecy, which here manifest in both actors' seemingly taken possession of to recite, as they move in jerky unison; and the sleeping sequence when Macbeth and his Lady attempt to defy another prophecy--that Macbeth shall sleep no more--by dreaming, and their dreams are built of their trauma cycles, relentless and torturing. Less successful perhaps is the macro story clarity for anyone not as familiar with the source text. My friend who attended with me knew the overall sense of the play but not the play-by-play of it, and had trouble following a number of sequences (especially Macbeth's recitation of the slaughter of Macduff's family, as this was the performance's first mention of Macduff at all). This failing, for me, boils down to a larger issue I've talked about before, when deconstruction or deliteralization is taken to such a degree that it obstructs story, especially for any observers not as steeped in the original text (recent examples include the revivals of Cyrano, Oklahoma!, and Assassins). I'm of the mindset that while having extratextual knowledge (or in this case, just knowing a non-deconstructed version of the thing) can add resonance to the observer,  the piece should still stand on its own for an audience member coming to the work fresh.

Read more »
Posted by Zelda Knapp at 3:06 PM No comments:

7/26/22: Between the Lines
What: Second Stage presents the premiere of a new musical adaptation of Jodi Picoult and Samantha van Leer's YA novel about a teen girl obsessed with a fairy tale who suddenly finds the hero of the story speaking to her from the pages of the book.
And?  I mean, who hasn't had a crush on a fictional character? I wanted to like this a bit more than I did, because honestly when it's good it's a damn delight and I had a huge grin on my face. The songwriters Elyssa Samsel and Kate Anderson are at their strongest when writing funny songs, like the teens' song, "Inner Thoughts," the mermaids' belter, "Do It For You," or the librarian's tribute, "Mr. Darcy and Me," all delightfully staged by director Jeff Calhoun and choreographer Paul McGill, under Jason Lyons's excellent lighting design and on Tobin Ost's whimsical and romantic scenic design. Caite Hevner's projection design is inconsistently effective, but it seems to be a part of theatrical design that's here to stay, so the most we can hope it that it won't hinder storytelling when utilized. Arielle Jacobs brings a sweetness to protagonist Delilah, but she is put to some comedic shame by the chops of some of her costars (Wren Rivera, who's got both a belt and comedic timing built to make us all jealous of their talents; Julia Murney, off-Broadway royalty and for good reason; the reliably wacky Vicki Lewis stealing the show every chance she can get; and Hillary Fisher's pitch perfect performances as both school bully Allie and dizzy Princess Seraphima). Is this production ready for a commercial transfer? Not yet. The production team is talented, as are the performers, but too often the show veers into such a degree of conventional story/cliche song type that I stopped listening during many of the earnest songs, and just grew impatient with many of the home scenes. I've seen this already, and I've seen it better. But with more sharpening of the text, more drive for unique specific takes, and keeping all the comedy (which really does work), this could be something.
7/28/22: Reverse Transcription
What: PTP/NYC presents two one acts about gay men in "pandemics past and present," Dog Plays by Robert Chelsey, which takes place in San Francisco in 1989, and A Variant Strain by Jonathan Adler and Jim Petosa, which takes place in New York City in 2020 and 2021.
And? I knew going in that the intention was for the two plays to be in conversation, but what I hadn't realized was that A Variant Strain was written expressly as a follow up to the AIDS era Dog Plays. (I also knew going in that my friend James Patrick Nelson was in the cast but I hadn't realized he was the lead in both, so that was a lovely surprise.) Variant Strain, like Dog Plays, is about an hour, and split into three parts: a confrontation of memory and coupling; a remembrance for the dead only somewhat known; and an aching imagined conversation with a ghost. The risk with both plays is how heavily they rely on their actors' having strong monologue work. Unfortunately, that's a mixed bag here, with the exception of (I know I sound biased but it's true) James Patrick Nelson, who imbues every moment with honesty and intention, not getting lost in either poetry or vague emotion. Luckily, he's able to carry a lot of both shows, but I will confess my mind wandered a few times when some of the others were speaking. However, Jonathan Tindle as Fido in Dog Plays, a simultaneously cynical and hopeful observer, brings a beautifully specific energy to his scene. Robert Chelsey's writing in Dog Days has some stunningly poetic lines that I wanted to capture in amber and sit with for an hour after. Jonathan Adler and Jim Petosa's writing for Variant Strain never quite reaches those heights, but Petusa, who also serves as director for both productions, sculpts both plays with a sure and delicate hand, so that each touch, each gesture, each character interaction is telling a story, is breaking open a heart. (one last point: I don't know if these plays are written explicitly about only white gay men in two pandemics, or if they were just cast that way, but it needs to be pointed out)
Read more »
Posted by Zelda Knapp at 9:00 AM No comments:

7/11/22: The Ninth Hour
What: Joe's Pub presents a concert of Kate Douglas and Shayfer James's new rock-noir musical adaptation of the epic Beowulf.
And? Really cool music and some great voices. I'll be very interested to see where this goes next. (they also gave us a brief interval of songs from some of their other projects, an adaptation of three Poe stories and one of Faust) Special giant shoutout to the two ASL interpreters who conveyed so much character, emotion and journey through each lyric repetition.
Posted by Zelda Knapp at 9:00 AM No comments:

7/07/22: Into the Woods
What: The Broadway transfer of the celebrated Encores! production of the beloved Sondheim/Lapine fairy tale mashup.
And? It's basically the same show I saw at Encores! in May, with some cast changes. And maybe it's on me for assuming that a Broadway transfer from a concert staging would also expand itself to be a full production, like Finian's Rainbow or Gypsy did, rather than pulling a Chicago. So since there's not much new for me to discuss, we'll just do some popcorn: 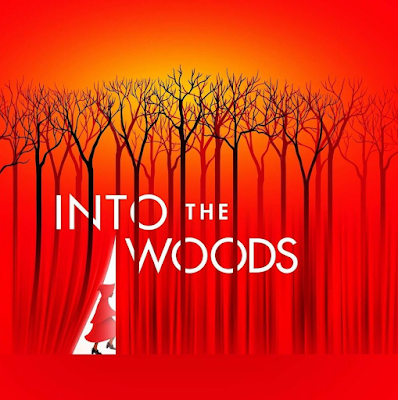 6/28/22: Lessons in Survival: 1971
What: Vineyard Theatre presents a play based on Nikki Giovanni's 1971 SOUL! interview with James Baldwin. This piece, conceived and created with The Commissary, continues Vineyard's exploration of documentary theater, and was originally presented digitally in 2020 as part of the Lessons in Survival series.
And? Consummately done. I could listen to Carl Clemons-Hopkins talk for hours in their deep melodic voice, and it is so thrilling to see the powerful and warm Crystal Dickinson in another great performance in less than a year. Amith Chandrashaker's lighting design does so much to sculpt the space and individual moments, bringing the two characters into smaller and more intimate lighting as the discussion digs deeper and deeper into these two great minds' guiding tenets. I will admit I didn't often understand what Josiah Davis's video and projection design was doing, but it didn't undermine the experience for me, so I don't mind (James Wilson's review on Talkin Broadway shows deeper insight into this--probably aided by a slightly higher seat than mine, as I could barely see the sea of static from the second row--so I'm linking it here). The conversation, though rooted in the issues most on their minds at 1971, is infuriatingly still relevant today, in the ways Black bodies and Black artists aren't allowed to simply exist, and the systems in place to keep them from rising. I can see why The Commissary saw the need to revive this conversation, to discuss these issues with such incisive clarity, so that we can, as the program note quotes, "Listen. To hear, not to respond./We need each other./To love is a tremendous responsibility./It's the only one to take. There isn't any other."