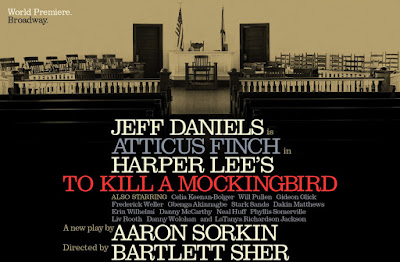 Read more »
Posted by Zelda Knapp at 8:20 AM No comments:

11/16/18: The Resistible Rise of Arturo Ui
What: CSC/John Doyle's new production of Bertolt Brecht's play about the rise of a gangster in Chicago in, of all things, the produce market. Also it's an allegory for the rise of Hitler. And in this case, it bears ominous shadows of America's current political situation.
And? Brecht is never going to be a favorite playwright of mine, but Doyle's style is a good fit for his work. The cast is fantastic, especially my favorite (Raul Esparza) as Ui, Christopher Gurr as Dogsborough, and Thom Sesma as Givola.

11/05/18: Super Awesome World
What: Part of the United Solo Theatre Festival, Amy Conway's piece uses her love of classic video games as a lens to explore her struggles with depression.
And? Delightful and powerful. Full review here.

What: Playwright Eleanor Burgess's new play at MTC, about a clash of ideas—and ideologies—between a white history professor and her black student that leads to unexpectedly viral complications for both women. Inspired by a real-life incident at Yale in 2015.
And? A contemporary revisioning of Mamet's Oleanna, where the conflict may no longer be about gender, but it most assuredly is still rooted in the flipping of power. I find it interesting that this is the second play I've seen this year (the first being JC Lee's Relevance at MCC) to feature an older white woman, who fought and won her own crusade for gender equality in academia, being challenged for her unexamined and internalized presumptions about race by a younger black woman joining her field. While I think Relevance stumbled into permanent imbalance by having the older woman at last use the N-word (and thus turn irredeemable), Burgess's work here is subtler and more elegant. She challenges the audience to think, but she doesn't instruct the audience what to think. Both women are right; both women are wrong. The degree of wrongness, or the category of wrongness, spans the gamut from basic ideologies to blind spots to intersectionality to the tenets of solid and professional scholarship (to say nothing of how to examine revolutions, both moderate and radical, and the fallout and recovery from sudden unwanted media attention). Both women say things that are hard for me to forgive, but both women also have a point (and before I forget, both are perfectly performed by Lisa Banes as the professor Janine and Jordan Boatman as the student Zoe).

Posted by Zelda Knapp at 8:42 AM No comments:


Plot and Background
Amy Conway brings her solo show, which has also played in the Edinburgh Festival Fringe, to New York's United Solo Theatre Festival. Her interactive one-hour play uses her love of classic video games as a lens to explore her struggles with depression.


What I Knew Beforehand
I knew the premise, and that the play came highly recommended from a good friend of mine who'd seen it in Edinburgh. I will admit to not being a gamer myself (I never did have good hand-eye coordination), but I used to watch when my sister and brother played Nintendo and, later, Super Nintendo, so the game references were not entirely lost on me.

It's more interactive than I usually prefer my sit-down theater (as opposed to the immersive stuff where you more or less know what you've committed to, going in), and yet I didn't mind that element. The quest to defeat the darkness becomes a joint mission, not just for Amy, but for all of us in the room. We help gather empathy points, heart points; we serve as the negative thoughts for her to defeat; and in one moment during which I held my breath, one audience member helps guide a blinded but trusting Amy across a treacherous lava floor. It was no surprise, at the performance that I saw, that once the show was complete, the entire audience stayed to help clean up the mess we'd made. That's part of healing, too, after all. Conway's piece balances the humor of play, the nostalgic fondness for (wow, those graphics) old video game tech, and the desolate ache of feeling like there's no way out. She doesn't shy from the pain of depression, or from how insurmountable it can seem when one is buried in sadness. Even as the piece gets intensely personal, she also makes her audience feel seen, feel recognized. On top of all those effective #feels, Super Awesome World is also just a really well-built piece of theater with a simultaneously surprising and inevitable conclusion.

10/29/18: The Prom
What: A new musical from Drowsy Chaperone scribe/star Bob Martin (and Chad Beguelin and Matthew Sklar), about a group of narcissistic theater actors desperate to reform their image, who glom onto a manageably-sized social justice battle: a teenage lesbian in Indiana who wants to take her girlfriend to the prom.
And? It's not perfect, and it definitely paints nearly everything with a broad brush, both the pastiche and the earnestness. But it's a funny time, with dynamic Nicholaw choreography, and some stellar work from Brooks Ashmanskas. I saw it on a special Monday night preview where the casts from Nicholaw's other three shows currently running were invited (Aladdin, Mean Girls, and Book of Mormon), so the audience was full of supportive insiders, laughing at all the theater jokes (which means I don't necessarily know how everything will play in front of a civilian audience).

11/01/18: Mike Birbiglia's THE NEW ONE
What: It's the new Mike Birbiglia show, you guys.
And? He's such a good storyteller. And I forget what a good storyteller he is, because the non-Mike Birbiglia roles he often plays are ineffectual prats, but he as an actual human is much smarter than that, and it shows in his original work. He's able to synthesize every piece of what seems at first like a disjointed train-of-thought narrative, in a really satisfying way. I'm deliberately not getting into the content here, because it's more fun to discover it as the story goes on.

Posted by Zelda Knapp at 8:59 AM No comments: