7/13/21: Merry Wives
What: Shakespeare in the Park presents Jocelyn Bioh's adaptation of the Bard's somewhat obscure spin-off about Falstaff, this time set in South Harlem.
And? This was so damn delightful. I'll confess it's a play I don't know at all, but this adaptation was full of so much playfulness and joy, a truly excellent cast (especially Pascale Armand and Susan Kelechi Watson as the titular Merry Wives, oh my god so good). Other standouts include Gbenga Akinnagbe as the attempted-cuckolded Ford and Joshua Echebiri in the dual roles of Slender and Pistol. Jacob Ming-Trent's Falstaff was funny if a bit less nuanced than either of the two wives he attempts to seduce. Jocelyn Bioh's script adapt is quick and punchy, and a happy blend of Shakespeare's text and the eclectic language of the blended West African immigrant communities in South Harlem. Dede Ayite's costume design is swoonworthy gorgeous, Beowulf Boritt's set is appealingly modular, and Jiyoun Chang's lighting achieves breathtaking beauty in the climactic spirit scene. What a happy return to the Delacorte after a terrible year.
Streaming Theater Related Content I Watched
Posted by Zelda Knapp at 9:00 AM No comments:

Live theater! I saw live in-person theater! My first live theater since March 11, 2020!
7/10/21: Love's Labour's Lost
What? Hudson Classical Theater Company's outdoor performance of Shakespeare's comedy (co-starring my friend Emily Bradshaw!), about four sets of would-be lovers and, well, the labours they undergo in the wooing, and then whoops it just sort of stops and the sequel is lost to the sands of time. Full disclosure: at the performance I attended, a light rain started about an hour and a half in, eventually increasing enough that the performance was called for rain before it concluded. We saw up to the prelude to the Worthies.
And? It was so thrilling to be back in a performance space again after all this time. Hudson Classical's production is fully vaccinated and semi-masked (when the performers are near the fully-masked audience). The courtyard area behind a monument in Riverside Park is a cozy and magical space, backed by trees and the sound of the city beyond. Fireflies even joined us around eight. This is a charming production of a play I'm not particularly fond of, and Nicholas Martin-Smith's direction helped remind me of the play's better parts, the charm and the banter, as well as the delights of Armado and Costard. John-Ross Winter's costume design is beautiful and appealing (including masks to match each costume), the women winsome and the men dapper. Among a generally solid cast of performers, highlights included Daniel Yaiullo's clever Berowne, Emily Bradshaw's brassy Rosaline, Bryan Bryk's Groucho-inflected Costard, Peter Sullivan's cheerfully dim Antony Dull, and Austin Reynolds's blustery and charismatic Don Adriano de Armado. 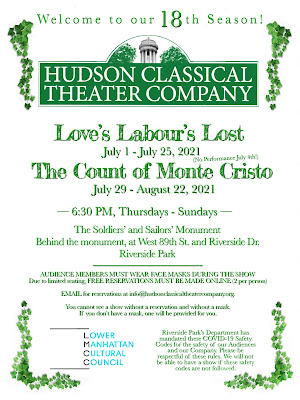 Weekly Margin 2021, W27: Hold Fast, "Master Harold" ... and the Boys, The Wolves, The Girl Next Door, Perkin Warbeck: A Masque of Anamnesis