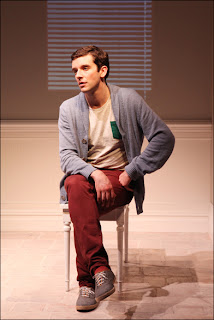 
Buyer & Seller opens with Michael Urie, in a delightfully dynamic and honest solo performance, perched on the edge of the stage, clutching a coffee table book to his chest, explaining to us what it is we are about to see. While behind him the neutral white space with piano bench, chair and table holding teapot wait for his use, he clarifies for us - interrupting himself several times - what is actually going on. The play is, as he is quick to point out, strictly a work of fiction and not meant to incite the ire of the apparently highly litigious Ms. Streisand. He is an actor - "You may know my work ...No? Oh..." - and Jon, the guy who wrote this, met Barbra only once, when she offered him part of her Kit Kat - an offer he declined. No, this is a work of fiction inspired by this very real book:

In My Passion for Design Barbra photographs and describes the many aspects of her sprawling manor home in Malibu, but the floor on which our playwright Jonathan Tolins fixates is her basement. Barbra, not one to merely store her various odds and ends acquired in her 71 years, has refashioned her basement into a street of shops to organize mementos and various other items. And, for the purposes of Jonathan Tolins's fantasy, has decided to hire a discreet individual with retail experience to man the shops when she wants to go a-browsing.

Enter Alex More, an out-of-work actor with a rather telling surname, who has never, he claims, been much of a Barbra Queen. He has no intention, he warns us, of even attempting to "do Barbra. I don't do her." But he will tell us the strange and wonderful story of the months he worked in Barbra Streisand's cellar mall.

What starts off as another dull exercise in waiting - "You have no idea how quiet it is in Barbra Streisand's basement!" - as Alex maintains (in dress shirt and leather apron) the frozen yogurt, the doll shop, the antique clothing boutique, the gift shoppe, and the popcorn machine, soon reveals itself to be a more indepth examination of a supremely lonely, supremely successful "perfectionist," once the incredulous gasp of disbelief has subsided.

Strains of The Devil Wears Prada may be heard in this clever scenario, executed with smooth ablomb, as Alex's first brief encounters with the lady of the manor lead eventually to a deeper understanding of this powerful woman whom he had, despite his birthright as a gay man, never learned to worship. But unlike Prada, which, while showing her vulnerability, never forgives Miranda Priestly for her ghastly abuses, Buyer & Cellar, while chuckling through it with sparkling wit, looks with sympathy on Ms. Streisand's plight - yes, she wants everything her way, but that's partly because she suspects everyone else of wanting it not her way. So yes, she may have sent back the sofa in the family room four times, and yes, she may insist on Arthur Laurents's explaining the nuances of each and every line in his script, but she is also someone who built a mall in her basement, and then hires someone to keep her company down there. This is a woman who doesn't know what it is to have friends who don't also need something from her.

Alex, meanwhile, spends his time in the basement literally and figuratively - always hoping his new friend Barbra might invite him upstairs to see the rest of the house, always hoping his career, his life, might climb out of its depths into something that matters. He describes his Utopia to Barbra as having the ability to create - paint, act, whatever - and that it would be good, "And everyone would think so. And I'd know it, too." But deep down, he must recognize that Barbra is not his key to that - she will not invite him upstairs, and she will not create his acting career for him - she is too lost in her own neuroses, too lost in her own navigation of their strangely symbiotic-but-unequal relationship. (Though it should be noted that when offered to share her Kit Kat bar, Alex, unlike our playwright, accepts without thinking.)

But what is Barbra's Utopia? Barbra, who has not only everything, but an absurdly overdetailed treasure box in which to hold it, admits what she wants and cannot have: "I'd be pretty. And everyone would think so. And I'd know it, too." We all want what is denied to us. It's the apple in Eden, but it tastes differently to everyone.

Inevitably, of course, their inequal relationship crumbles as its edges are tested. Once Alex, who has given all he could to Barbra, even coaching her in preparation for her new film version of Gypsy, realizes he is worth enough that he can demand something in return - an epiphany he has, notably, once Barbra has finally invited him out of the basement, upstairs to her level - once he demands his just desserts in friendship, they both understand it is more than Barbra can give him. And there's no going back.

Alex More leaves Barbra behind, but he does not leave behind what he has learned. He takes his severance check to Crate & Barrel to buy the first luxury decoration for his apartment. But when the carpet he purchases isn't quite right for what he pictured, Alex turns to us and confides, "So I sent it back," demanding more, demanding better, demanding to be set free of the basement. 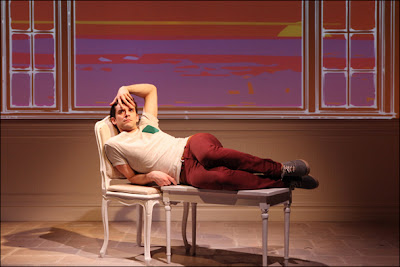