The Trip to Bountiful: Her Story and Her Song


There is hardly anything more satisfying than a good story, well-told. Well, there's one thing - being surprised into a good story, well-told. I didn't know what I was in for when I saw the current revival of Horton Foote's The Trip to Bountiful. I usually have some clue, before I see a show, of how much I'm going to like it. Whether it's from some prior interest in the performers, the writer(s), the director, or the company presenting it, or from word-of-mouth, I can usually predict accurately at least an outline of my enjoyment (or lack thereof). Here, I had almost no predictions. I didn't know the play or director, I didn't have much investment in the performers, and the poster art didn't really tell me much beyond what the leads looked like: 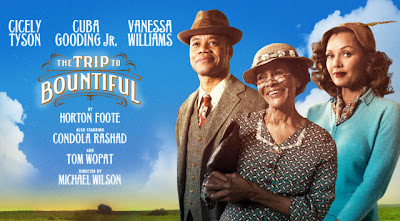 My prediction, knowing it was another revival, was that I might be able to admire some of the craft, but that I would ultimately not be emotionally invested in what was happening. At worst, I would be bored but not appalled. And, for the first twenty minutes, my prediction was holding true. I watched a middle-aged couple, Ludie and Jessie Mae Watts, living in a cramped two-room apartment with Ludie's mother Carrie, squabbling about minor things - mostly stemming from tension between Jessie Mae and Carrie, but also including the tightness of money and Ludie's intention to ask for a raise at a job he has held only six months following a two-year illness. I knew (or thought I knew) what story I was being told, and settled back to let them tell me.

But then - while Jessie Mae is off to the drug store for a drink, Carrie, with hastily packed suitcase and a secreted pension check in hand, creeps out of the tiny Houston apartment to begin her exodus to her hometown Bountiful. She steps out quietly, peers one way, then another. And then - as she confidently sets off on her journey - the music jubilantly strikes up as the set flies backwards, and we are off on a journey, a journey that perhaps we should have seen coming from the title. But you see, I hadn't quite realized this was Carrie's story.

But as Carrie continues on her pilgrimage to a home she hasn't seen in twenty years, it becomes very much her story - her story now and her life story leading up to now. She bonds with a young war bride, Thelma, also journeying home to wait for her husband, as well as with the station agent, the Sheriff, and anyone who will listen to her, sharing her history, explaining why she needs to go home again. Her affection for her hometown, now gone to rot and ruin, as well as her enthusiasm for life and her new-found freedom, are so infectious that she is able to lead not only Thelma and Arthur, the station agent, in singing a hymn of celebration, but the audience as well.


And when Carrie finally returns home, brought there by the sympathetic Sheriff, the pastoral beauty of the rising sun is so lovely, we don't see the dilapidation of her old house, the weeds encroaching on the yard, any more than she does. We see the beauty in the roses climbing hapharzardly up the side of the house, the open expanse, so refreshing after the claustrophobic Houston. We see her face, alight with joy and peace. She is not crazy, as Jessie Mae has been insisting - she is just determinedly herself, and now, after swallowing so much of it in Houston, she is fully with herself here in Bountiful. Her trip home is such a boon that she puts up no fight when Ludie and Jessie Mae finally catch up with her, to bring her back with them. As she keeps repeating, she got her wish. She came home. Everything else will be fine.

By a striking coincidence, May's Playbill has an article called "A Changing Stage," by Robert Simonson, about Actors' Equity Association's past struggles and negotiations with Broadway producers regarding race. It cites the controversial casting of Jonathan Pryce as the Engineer, a Eurasian role, in Miss Saigon, a battle Equity lost, though all subsequent performers in that role have been at least partially Asian. It talks otherwise about the gradual integration of minority races into theater through "race-blind" casting, and the various ways that has been encouraged and accomplished. This production achieves that in a rather interestingly quiet coup - with no changes to dialogue or textual acknowledgement, nearly all the characters - but notably not all, as the Houston bus station is staffed by White men, and the Sheriff is also White - are now African American. Our main acknowledgement of this change comes in the set design - as when Carrie sits in the Greyhound bus station, we see a sign with an arrow saying "White Waiting Area," and she queues at the "Colored Line," separate from the line for the White men buying tickets. These acknowledgements of period (the play takes place in the 1940s) are there, but they are not screamed at us, nor turned strident as a statement. They are merely facts of life, accepted without comment, as conditions under which our story is told.

And when Carrie is home, none of that matters. None of the little things can matter. She got to see Bountiful again.