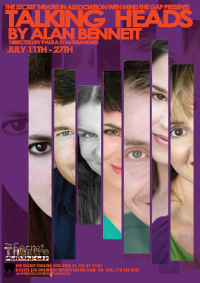 There's rarely any money in Off-Off-Broadway theatre. They do it for love, we see it for love. Sometimes companies can produce fascinating spectacles with small budgets. And sometimes they rely on the two tenets of storytelling which are truly vital to having a good theatrical experience - the story being told and the ones telling the story - the writing and the actors and director. The Secret Theatre's and Mind the Gap's production of Alan Bennett's Talking Heads has no budget and no spectacle; the actors move their own furniture and props and there are no elaborate stage pictures. But what it has in spades is good stories being told by good storytellers - and so, with very little fanfare, we have a moving and funny night a the theatre.

Series 2 of Talking Heads consists of three monologue pieces: "A Chip in the Sugar," "Nights in the Gardens of Spain," and "Hand of God," performed by Tom Patrick Stephens, Amy Scanlon, and Fiona Walsh, respectively. Director Paula D'Alessandris directs them simply and straightforwardly - respecting the intent of the overall title of Bennett's collection. These are stories to be told, not to be reenacted. She's given her performers several stations at which to tell their stories - an armchair, a bench, a wooden chair and table - and allowed her actors to simply exist in the space, to be there, and to tell us their stories, in their own time. The result is a quietly poetic evening with bouts of whimsy, and an aura of wistful loneliness hanging over the space like a mist.

In "A Chip in the Sugar," Tom Patrick Stephens walks the delicate line of a man suffering from some unspecified mental illness, quietly melancholy, unemployed, and living with his forgetful and somewhat delusional mother. Even when his paranoia about his mother's new beau is confirmed, he experiences no triumph, but settles back into his resigned routine, accepting her barb of "I remembered with him; I don't remember with you," by repeating to us and himself, "I didn't say anything." The quiet strength of Stephens's delivery belies the timid nature of his interactions, and hints at deeper reserves of feeling, kept carefully hidden from his mother and from us.

Amy Scanlon, in "Nights in the Gardens of Spain," plays housewife Rosemary who befriends a neighbor now in prison for murdering her husband. Though perhaps a bit young for the role, Scanlon rises to the emotional challenge of the piece, as Rosemary gradually uncovers the more horrifying truth behind closed doors of her quiet neighborhood, finding herself just as trapped as her friend behind bars.

Though I'm loath to rank these three, Fiona Walsh was perhaps the most enjoyable performance of the evening, as scheming but somewhat inept antique dealer Celia in "Hand of God." She has the wry delivery of a woman always looking toward the next sale, the next bargain - speaking to us, but looking just past us at the customer who just walked in the door. Even when she's dealt a humiliating blow in letting a priceless artifact slip into someone else's hands for a measly hundred pounds, she still looks for a way to somehow get the upper hand on someone, and survive.

Compared to its neighboring production of Macbeth, Talking Heads is certainly a much smaller, more personal affair. But don't let that fool you into thinking it's not worth your time. It's an intimate look into three people's lives - their triumphs and their quiet despairs.