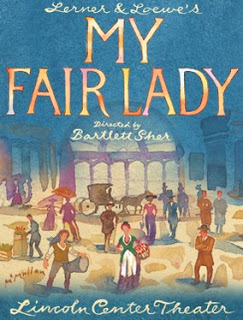 On March 20th, I saw a preview of the newest revival of My Fair Lady. This production has been lately included in lamentations over the reviving of dated and sexist material; I find its inclusion in the conversation misguided chiefly because people are lumping it in with Carousel, an unfair and inaccurate coupling. Entering a This-Is-Zelda's-Opinion Zone, I'll start by saying Carousel is a bad show.

How is Carousel bad?
My Fair Lady is a good show, with some problematic characters. There's a difference.

The objections, I have to assume, circle largely around the male lead, Henry Higgins: a cantankerous "confirmed old bachelor" who treats Eliza like a pet and whose musical canon includes the following gems:

Which ... yeah, Henry Higgins is a raging misogynist (He claims he treats everyone shabbily; I say he treats Colonel Pickering noticeably better than he treats the women). Eliza seems to be the first to make him realize that women are humans with souls. Henry Higgins is a brilliant but crappy person. But the thing is, the show knows this. The show doesn't think he's in the right. The show is on Eliza's side the entire time. Eliza is the hero, the one to realize self-actualization. Higgins's epiphany is that Eliza is a person. Eliza's epiphany is that she's a better person than Higgins, and that she doesn't need him for validation.

There are some arguments to be made for the show's failing to tell a positive feminist story. For instance, it's never been clear to me why Eliza, after telling Higgins he will never see her again, returns to and seemingly reconciles with Higgins whilst he plays the cylinder recording of her first visit (a coda which does not exist in the musical's inspiration, George Bernard Shaw's Pygmalion). No spoilers, but this production, with its attempt to make Eliza's final moment an even stronger statement of independence, still fails to answer that question. We see Higgins's journey to recognizing Eliza's value; we don't see Eliza's journey to giving him one last chance. But even so, this is a narrative about a woman realizing her value: that she doesn't have to be defined by her origins, but by the work she can do, and by her mind and spirit. This is about a flower girl realizing she's always been a lady. Higgins is entertaining, and gets plenty of showy stuff, but this is Eliza's story.

The other big argument concerns the musical's bookwriter and lyricist, Alan Jay Lerner. More specifically, it concerns his obnoxious tendency in far too many of his scores to give his male protagonist a Rant Aria about how irrational women are. I don't know the man's personal life, but this pattern smacks of something, and it rhymes with schmisogyny. With that lens, it's impressive Eliza is as fully realized a protagonist as she is. But, as my friend Mark Falconer pointed out amidst a spirited Facebook thread, that's probably more Shaw's doing than Lerner's.

Carousel thinks it's okay to liken physical abuse to an expression of love. My Fair Lady makes it very clear that Higgins's treatment of Eliza is unacceptable, and that his attempt to take credit for her autonomy, undermining her both in spirit and in stealing the applause moment from "Without You," is as little and low as he can get. Bottom line: I don't think My Fair Lady should be retired to the mudpit of shows no longer acceptable to produce, and I don't think its worth should be reduced to the voice of one of its characters. (We can stop producing Carousel, though. That's totally fine.)

Okay, so what did we think of the current revival at Lincoln Center?

Play: This is one of those shows that is good enough to transcend the quality of its production. The production is fine; not a definitive one, but not a disgraceful one. I was disappointed that the staging across the Vivian Beaumont's wide curving thrust was neglectful of its side sections; there's usually a better balance in that space. While this production makes clear how untenable an actual romance between Eliza and Higgins would be (including the revision to the final moment), it yet leans heavily into some no-homo territory for Higgins and Pickering (despite the countless scholarship and fan analyses which point to the two life-long bachelors who enjoy dressing up their pretty young friend; no, this production has both men start noticeably at Higgins's line, "Would you complain if I took out another fellow?"). The production also makes it clear that Freddy, with his simplistic idealization of Eliza as his Manic Pixie Victorian Girl, is no more suitable a match for Eliza than the dustmen of Covent Garden, or than Higgins. Since there's not much controversial to the majority of this revival, I'll wager the #discourse will be about that final moment, and here's my two cents: I think George Bernard Shaw would prefer it tenfold to how it was done originally.

Cast: I saw the second preview performance, and with opening night nearly a month away, I believe and hope the performances I saw will deepen and develop. And - this is perhaps the wrongest thing to have to write about this show in particular but - the accent work is uneven across the entire cast, principals and ensemble both. This, too, I hope will improve. Lauren Ambrose brings to Eliza a sweet vulnerability and hope, but is sometimes reacting, then speaking, which affects the pacing. She has a legit soprano equal to the range required, though her voice is a bit smaller than some previous incarnations. Harry Hadden-Paton emanates the intelligence and charismatic dickishness needed for Higgins, though his presence doesn't command attention the way Ambrose's does. Norbert Leo Butz, here playing Eliza's father, Alfred P. Doolittle, remains one of my favorite non-dancers dancing on Broadway today.

Design: Set designer Michael Yeargan draws an interesting demarcation between Eliza's world and Higgins's world. The set pieces in Eliza's world - the world of the streets and of people - have an old-school look to them, forced perspective flats with burlap sides, lampposts pushed on and placed by the cast. Higgins's world, his house and hearth, is of one piece, a large library set which slides forward on its own and rotates to show different rooms. It is the opulent, ornate, and enclosed sanctuary to Eliza's gritty, spare, and expansive streets. Interestingly, Higgins's mother's home is a combination of these two styles, suggesting that there is middle ground between the Elizas and the Higginses in this society. Catherine Zuber's lavish costume design is a mixture of nostalgia for the iconic shapes and cuts of the original production and film (particularly our first looks at both Eliza and Alfred P. Doolittle), and a fresher glance (Eliza's ball gown, for one, is not the iconic virginal white gown, but a pale apricot to complement Lauren Ambrose's coloring).