Weekly Margin 2018, W38: Be More Chill, I Was Most Alive With You, Bernhardt/Hamlet, Bigfoot Stole My Wife (and Trudy Carmichael's Character Cabaret)

9/19/18: Be More Chill
What: My easiest allusion to make here is Little Shop of Horrors meets 21st century high school popularity woes. Be More Chill is the new hot show among the youths (who, for the record, were very well behaved during the show), about the lengths to which people will go to achieve popularity. They've already announced a Broadway transfer.
And? It didn't blow me away, but it's fine. Everything felt like it was at level 11, which is a bit exhausting, especially in a relatively intimate space. The cast is funny, though I don't love the timing of the actor who played all the adults (but his bio tells me he's collaborated with the composer for over a decade, so he's not going anywhere). Jason Tam is fantastic as an increasingly glammed-out Keanu-inflected Squip, and it's nice to see a fairly diverse cast. Musically I felt a lot of echoes of this genre's (youth-geared) predecessors (opening number recalling Dear Evan Hansen themes, "The Smartphone Hour" causing simultaneous Bye Bye Birdie and JRB's 13 flashbacks, etc.), which isn't necessarily a criticism (I can still recall many of the melodies days later). I think the show definitely knows its market, and that market is responding with great enthusiasm.

9/21/18: I Was Most Alive with You
What: Craig Lucas's new play at Playwrights Horizons, inspired by his own struggles with addiction, about a family who must come to a peace with the things they are helpless to change. Taking a heavy allegorical parallel from the Book of Job, I Was Most Alive with You is performed with a shadow cast of Deaf actors, performing the show in ASL (this is not a gimmick: one of the characters, Knox, is Deaf (played by noted Deaf actor Russell Harvard), and another character, Farhad, is losing his hearing.
And? Very powerful theater. Both the ground level cast and the elevated shadow cast were compelling and daringly vulnerable in their performances, making it equally as engaging to watch one cast as the other. Russell Harvard, for whom the play was written, is gut-wrenching and poetic. The beauty of his signed prayer, contrasted with the clumsy but well-intentioned signing of his family, or even the more eloquent signing of the shadow cast, highlights the purity of his soul, and making it ache further, when that beauty is lost. And the ending, you guys, is perfect. Bring tissues.

9/22/18: Bernhardt/Hamlet
What:  Theresa Rebeck's new play, about noted 19th century French actress Sarah Bernhardt's legendary performance as Shakespeare's Hamlet, and those who opposed or supported the attempt.
And? Honestly, I never have a strong reaction to a Rebeck play. She may pick interesting topics (the topicality of a host of men resisting a woman's attempt to take power is not unlost), but she doesn't dig particularly deep. That being said, Janet McTeer is unbottled lightning, and always a highlight in anything she does (also giving solid performances were some of my favorites, Ito Aghayere and Jason Butler Harner, as well as Dylan Baker).


9/23/18: Bigfoot Stole My Wife
What: Part of the annual United Solo Festival, Alan Altschuler's Bigfoot Stole My Wife is a mix of the writing of Ron Carlson and Altschuler's own story, about the many ways for relationships to end, on the road to growing up.
And? An entertaining and ultimately sweet blending of three narrations (Alan's story, the man whose wife was stole by Bigfoot, and Bigfoot himself), told simply and cleanly with a few chairs and key character props. I was glad to support my friends' work (I know Alan, as well as his director, Andrew Borthwick-Leslie, and assistant director, Erin Keskeny). 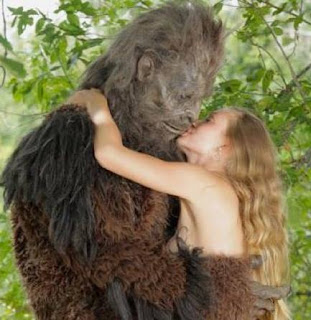 I also got to see my brilliant friend Beth Slack perform in Trudy Carmichael's Character Cabaret, and she was hilarious in her patter and then utterly lovely and moving in her singing of "Love, I Hear" and "When Did I Fall in Love?" Everyone else was delightful too but she was my favorite.
Posted by Zelda Knapp at 8:06 AM