10/16/18: Goodbody
What: The Crook Theater Company's first original work, about a woman with no memory, a dead body, a bloody beaten man, all in a barn in upstate New York, with a clock to beat before the consequences come knocking.
And? Full review here.

10/17/18: The Thanksgiving Play
What: A school theater director, a street artist, a history teacher, and an LA actress gather together to craft a devised play for the school's Thanksgiving observance, determined to be as progressive and virtue-signaling as possible.
And? It felt, in a way, like a sequel to Playwrights Horizons's earlier Miles for Mary (it even played in the same upstairs space). The actors were good, there were funny moments, but a lot of this play indulges in the cringiest aspects of both tacky careless racism and overly-demonstrative privilege-battling. Not bad, but not for me.

10/20/18: Oklahoma!
What: Director Daniel Fish's pared-down revisioning of the Rodgers & Hammerstein classic about a romance between a cowman and a farm girl, and a community teetering closer to civilization, as presented by St. Ann's Warehouse and Eva Price.
And? There's a lot to praise here. The intimate, brightly-lit immersive barn space full of long tables prepped for the box social, is appealing (scenic: Laura Jellinek). The rockabilly orchestrations by Daniel Kluger are charming. The voice talent (unamplified except in specific and deliberate moments) is strong, the humor is good (particularly Ali Stroker's Ado Annie and Michael Nathanson's Ali Hakim). The lead couple is earnest and romantic; the comic couple is adorable and charming. The minimalist staging and sometimes deliberately emotionless line delivery recalls John Doyle's Sondheim ventures. However, there's a risk with that degree of deconstruction (in Doyle's case, while the story of Company remained clear, a lot of the narrative of Sweeney got muddled for me). Here, a friend who attended with me and was not as familiar with the show, had difficulty following the story and grasping the stakes (and for myself, I got nothing from the reimagined dream ballet, either toward furthering character or story).

What I do find most immediately striking is the examination of toxic masculinity at play. Nearly every man, beginning with Curly and his guitar-strumming "Oh, What a Beautiful Mornin'," prowls the space with a predatory gait, a quiet hint of danger, with the potential for violence seemingly simmering like the crockpots of chili distributed throughout. This is interesting, but it also means that Jud, the purported antagonist, doesn't stand out at all. He doesn't seem like a potential menace; he seems like the rest of them, if a bit sadder. So instead of a community where everyone instinctively senses a hidden danger in him, we aer given a society who has collectively decided that they simply don't like this man, without explanation. He becomes a pitiful figure, which makes the final confrontation (and its liberties) bewildering. And listen, I won't deny that the choices made here are good theater. But I think they're in direct conflict with the text, with the authorial intent (which, if we recall my review of Ivo van Hove's The Crucible, is a sticking point for me). The  characterization of Jud is not supported by the text. It's just not.

And, as with Crucible, though I found a lot of powerful work here, particularly with the cast, I'm having trouble getting past that.

10/21/18: Plot Points in Our Sexual Development
What: The title is accurate, and I don't want to elaborate further, because that would ruin the discovery of this tight hour-long two-hander from playwright Miranda Rose Hall, at Lincoln Center's intimate Claire Tow space.
And? Beautifully scripted, simply directed, and performed with such charm and naked honesty by Jax Jackson and Marianne Rendon, this was a lovely and moving piece with a full and satisfying journey. I'm so glad I caught it.

10/21/18: National Theatre Live: King Lear
What: Chichester Festival Theatre's intimate production (as broadcast by NTLive) of King Lear, starring Ian McKellen as Lear and Sinead Cusack as Kent.
And? Not bad. Both McKellen and Cuasack were great, and I also enjoyed James Corrigan's charmingly devious Edmund. 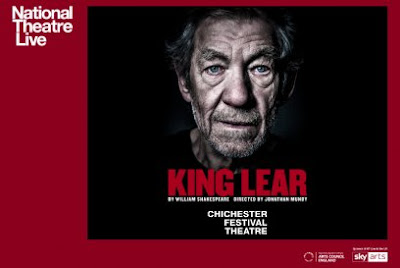