2/29/20: Hamlet
What: St. Ann's Warehouse, in association with Kate Pakenham Gate Theatre Dublin, presents the Shakespearean heavyweight of dramas, starring Irish superstar Ruth Negga.
And? I'm really surprised to be writing this, but I was left mostly unmoved by this production. Ruth Negga was excellent as Hamlet, and Aoife Duffin heartbreaking as Ophelia, but for most of the first half, it felt like no one else onstage much cared what happened next. And the first half is nearly two hours. Claudius and Gertrude woke up a bit in the second half, and the last ten minutes of the show are breathtaking, but that's not enough ultimately, especially with a few questionable design choices (why the rain? why the plastic curtain? why the zombie moment?).

2/29/20: A Man of No Importance
What: Bookworm Theatrics presents a fundraising performance of the Ahrens and Flaherty (and McNally) musical based on the 1994 film of the same name, about an amateur theater troupe in 1964 Dublin, attempting to mount Oscar Wilde's Salome. And most importantly, Abigail Getty is in it.
And? It is mindblowing what a group of dedicated performers can do with only 29 hours of rehearsal. While the show itself will never be a favorite of mine, this was a fun production of it with a playful cast, full of laughter and heart. 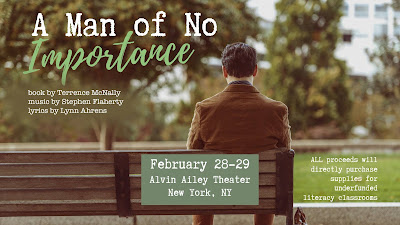