6/20/22: Hamlet
What: Park Avenue Armory presents Shakespeare's longest tragedy, about a prince who learns from his father's ghost that his uncle is a bad bad man and then spends way too long checking his sources. Robert Icke's celebrated production first played at the Almeida Theatre and the West End and is now running in rep with his adaptation of Aeschylus's Oresteia.
And? Well, this production messed with the timeline enough that Hamlet doesn't actually spend all that much time checking his sources. The scenes are reordered to such a degree that, on the night of Gertrude and Claudius's wedding reception, Hamlet is able to overhear both Laertes and Polonius warn Ophelia off him, learn about his father's murder, decide to put on an antic disposition, scare Ophelia with his piteous and profound sigh, and miss the moment when Claudius has already preemptively invited Rosencrantz and Guildenstern to spy on their school friend. He spends Day Two being sad, breaking up with Ophelia, meeting the players and setting up the "Mousetrap," beating himself up for not murdering his uncle yet even though it's only been a day in this timeline calm down dude, tearing his mother a new one, eavesdropping on Claudius's confession and yet somehow not murdering his uncle but yes murdering Polonius, and--a day after being told the king doesn't want him to leave Denmark--being shipped off to England. Y'all, it's a lot. And while they find some interesting moments with Hamlet's propensity to eavesdrop (Claudius delivers half his confessional speech while looking right at a lurking Hamlet, which is a choice), I think it drastically undermines anything resembling Hamlet's traditional journey. A lot of the usual cause-and-effect building blocks of the play as written are reordered, and I don't know if this new house has enough grounding to avoid collapse. Some of the cast are truly excellent, especially David Rintoul (strikingly doublecast as both Ghost and Player King), and Angus Wright and Jennifer Ehle as Claudius and Gertrude. Alex Lawther's Hamlet is fine if unexceptional, and overall I felt a great lack of stakes or urgency across the whole company. It's not just that this production of Hamlet, at 3hr45min, is long, it's that it feels long, which is a greater sin. 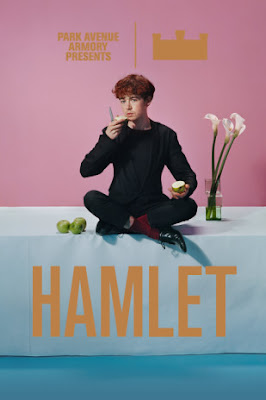 6/23/22: Don't Look Back
What: Voyage Theater Company presents the world premiere of Adam Kraar's adaptation of the story of Lot's wife.
And? Beautifully cohesive, though a bit repetitive. Full review here.
Posted by Zelda Knapp at 11:36 AM