The Case of the Pen Bandit, part three: Ambushed

Previously, on The Case of the Pen Bandit ...

Inspector Zelda shifted her weight forward onto her hands, trying to relieve the cramped muscles in her crouching knees. She felt her hip pop unhappily and froze - she knew from experience even the slightest noise could tip off all manner of ne'er-do-wells and cat burglars. As the pins and needles went skittering down her calves to her toes, Inspector Zelda groaned inwardly and puzzled once again how she had gotten herself into this pickle.

Of course it had seemed like a brilliant idea at the time - why try and bait the lowly cups of pens on various desks, when she could stake out the very source of the pens (besides, all the spare peanut butter had been used up capturing Feivel's cohorts Sneivel and Trifle)? After all, any good robber knows he can bundle more lettuce at a bank than by nipping wallets and handbags. So here was Inspector Zelda, gone rogue from her desk, squatting behind stacks of paper reams, waiting and waiting for a Pen Bandit who apparently hadn't gotten the memo.

After giving the devious Pen Bandit one more hour to show himself in the supply vault, Inspector Zelda was forced to acknowledge that perhaps her hunch had not paid off.  She straightened, and limped on numb legs back to her desk.

That's when she saw - the lowest blow of all - not only was her cup of pens entirely depleted, but ... the Pen Bandit had left a note! 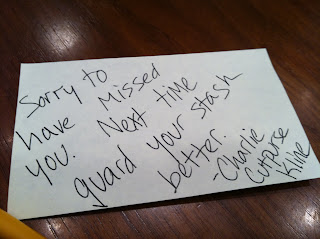 Inspector Zelda sank back into her swank swivel chair in defeat. Sure, she finally had the name of the Pen Bandit, but she was no closer to actually catching the devil.
Posted by Zelda Knapp at 11:30 AM