Who needs a manual? 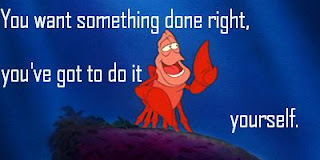 Harkening back to my post about being a Salesman, I've been thinking part of my problem with trying to sell myself as a product is not just that I don't particularly enjoy the game of trying to convince someone to do something they might not otherwise; it's also that I'm not terrifically good at asking for help. (This help can range from "hey random stranger in the grocery, can you help me reach this very high object? I must needs get my Kix on," to "I'm producing this play and my co-producer is not volunteering anything and I feel like I'm drowning and it's too much.") A corollary to this is of course that I'm not great at asking for favors, or in general submitting myself to anyone's attention.

Obviously, I've gotten over this aversion for the sake of my acting career - by necessity only. I submit myself up and down, acting-wise.

But when it comes to Submitting For Your Attention myself as a writer, I've just never gotten any good inertia on it. I submit to online magazines occasionally, which by the way take forever to get back to you, and the answer is always an impersonal "no." But I haven't yet tried to hunt down any kind of literary agent (I suspect any such agents would want you to have some kind of published work before they even consider making eye contact with you, so we'll leave that alone for now). As a playwright, I have submitted to a couple festivals, though not many - NYFringe said no the first time 'round, but I will try again - but my solo show has actually been accepted to two different festivals, yay me, so it's not like I'm facing a giant wall of rejection.

But for the most part, as a writer, I'm learning that, especially in the current state of technology and networking, the best way to get your work out there is to Do It Yourself.

I have written three finished one act plays (well, as finished as any writer ever considers any of her writing). And I have had all three of these plays produced in New York City, on the Off-Off Broadway scene. Howwwwwww you ask? Yep. Produced them myself. No, not alone, I hate producing, ugh, but you gotta do what you gotta do. My first two plays, This is Hell and Butterflies, I co-produced with friendAndi, as part of the first production of a theater company we also co-founded with some friends (see? Do It Yourselfing) to provide a place for us to show our work as actors, directors, etc. My solo show was also initially produced by this same company, though subsequent presentations were with others, and I often still carried a chunk of the "producing" of the show on my shoulders. (And of course, two of these three plays featured juicy roles for actorMe to play - part of Do It Yourselfing means writing yourself roles if you can. I have no shame.)

This blog itself is of course a Do It Yourself way to get my writing outside my own hard drive, even if it's for the most part my own brain trying to organize itself.

And the next step ... self-publication. This used to be exclusively the province of amateurs - cheap-looking paper-bound books found in St. Mark's Bookshop or other independent sellers, stacked in a corner as totems of writers not wanted elsewhere. And ... that's less true now. The digital age finally got its hands on the print media but good, and devices such as the kindle and nook are making both book-printing (so to speak) and book-reading cheaper and easier. And writers can now self-publish with relative ease.

And - more importantly - they get worldwide distribution just as easily.

I also discovered yesterday the very cool concept of the Kindle Single - like a musician will release a Single separate from the full album also released, so too can writers publish Singles - pieces too short for long-form, but yet sent out on their own.

This is epic. This is awesome. This is the Master Plan.

So. I'm not there yet. But I'm moving forward on it steadily: publishing my short stories - the longer ones as singles, and the shorter ones grouped together into one book.

Coming soon to a web browser near you!


Post-script: Editors welcome. Apply within with the subject line "Submitted for Your Attention"
Posted by Zelda Knapp at 1:13 PM

Email ThisBlogThis!Share to TwitterShare to FacebookShare to Pinterest
Labels: acting, This Is What They Made It Out Of, writing