Don't Mess With Me, Delta

On September 29th, 2013, I experienced one of the most unpleasant travel experiences in my life. I’m not referring to my cancelled flight, though that was of course unpleasant, but more to the unprofessional and dishonest way it was handled.

I was initially set to depart Dallas-Fort Worth for LaGuardia on Delta 5801 at 2pm. After everyone had boarded, they shut down the plane to deal with a just-discovered mechanical problem. I don’t know if you’ve ever spent an hour in a powered-down plane in the 2pm heat of a Texas sun, but I’ll tell you right now that was less than pleasant.

Around 3pm we deplaned and were advised to stay in the area in the event our aircraft was fixed. By 4pm our flight was cancelled. I immediately called the number given to us by the gate agent, 1-855-548-2505, and spoke to a Lise Through Her Teeth, asking to be rebooked.

Lie #1: Lise told me I had already been rebooked for a 7pm flight that day on American Airlines (flight #1154). I asked why I had not received an email or a text to indicate this, and she said she would send the email immediately. The email address she had on file (generic@oldserver.com) was in fact my old address, so I had her update my account and send it to my current email address (muchbetter@trendy.com). She confirmed that the email had been sent, and we hung up.

I checked the screens but did not see the American Airlines flight listed. I repeatedly checked my email inbox on my phone, but saw no email from Delta. After five minutes, I called again and spoke to a different phone operator. She informed me that I was not booked on an American Airlines flight, but had in fact been rebooked for the following day, on a Delta flight. At this point I was near tears. She said there were no other flights I could be booked on that day, direct or with connections, and I should wait in line with a gate operator to get a hotel voucher and request my suitcase. While I waited in line I had to call my boss to tell him I’d be missing a day of work.

I waited about half an hour in line, where I spoke to Bender of Truths, who confirmed that I was rebooked for the following day and printed my boarding pass for me, as well as requested my checked suitcase be pulled and brought to the luggage carousel. He then gave me a hotel voucher for the Ramada Inn, as well as a dinner voucher for $7 to be used at the hotel restaurant – which, as anyone knows, will buy you a side salad in a hotel restaurant and is basically useless.

Lie #2: Bender told me that if I waited by the courtesy van stop at Ground Transportation, a van from the Ramada Inn would stop by within half an hour, as they came regularly. This was not the case. As I learned, after 40 minutes of anxious waiting, the Ramada Inn requires that you call to request transportation. I met another passenger from my flight, who had also been told this lie, while I waited. She had been waiting there for an hour.
Lie #3: Bender told me I could use the $7 meal voucher at the restaurant located within the Ramada Inn. The Ramada Inn not only didn't have a restaurant, it was in a severe state of construction – or deconstruction – across the entire ground floor.

I would like to be clear. Unlike Lise's lie above, which is so unprofessional and disgusting a lie I don’t even know how to process how such an error could be made, I don’t believe Bender's lies were in any way malicious. I think that he was just severely uninformed about the actual nature of the hotel. Regardless, he was giving out bad information on multiple counts to more than one passenger, which reflects badly on everyone.

When my fellow beleaguered passenger and I finally arrived at the hotel and realized there was no restaurant, I inquired at the front desk how I might get something to eat. He pointed me toward several menus for restaurant delivery. None of them accepted vouchers, so I am attaching a copy of the receipt for the food I ordered, which came out to significantly more than $7.

As a final kick in the pants for my day of misery, my room in the hotel sported not only a disastrously cracked sink, but a centipede making himself at home on the wall (see attached pictures). I cannot remember the last time I stayed in such an unpleasant facility. 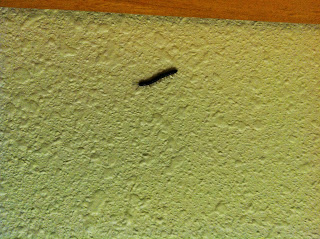 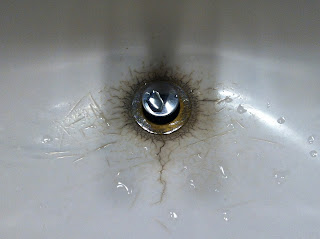 The flight the next day took place without incident, though Bender the gate agent recognized me as he took my ticket, and apologized for the inconvenience. He didn't even know the half of it. Honestly, at this point, I don’t know why I would want to fly on your airline again.

After I send you this letter I intend to publish it online, names omitted.

With regards, and
hoping you will rectify these offenses, and ensure they don’t happen again,

PS while my updated itinerary was eventually emailed to my current email address, Delta’s apology email sent later that week was sent to my old Hotmail account. Apparently Lise didn’t update my records nearly so well as she thought she did.


[Note: I sent this electronically yesterday. This morning I received a reply, almost completely a form letter, but offering me bonus miles and a reimbursement for my meal. I'm accepting those but I'm replying back, since they refused to acknowledge that Lise lied to me.]
Posted by Zelda Knapp at 11:51 AM