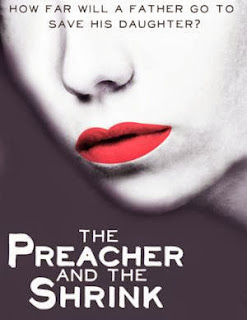 This examination of the power struggle between an emotionally stunted father and his daughter, a cluster of raw nerve endings, would perhaps have been easier to take were it not couched in this accusation of sexual harassment - particularly in the volatile climate of gender politics in which we are now embroiled. To have a woman accuse a man of the cloth of misconduct is perhaps nothing new. But to then reveal that she realizes the actual benignity of the moment as clearly as he does, and is instead manipulating that moment to exact revenge on her father, delegitimizes every woman who has been assaulted and then been called a liar or a slut when she came forward. Perhaps playwright Good fancies this a new twist on Oleanna or Doubt, but choosing to tell a story where the woman in fact is consciously lying, is playing dangerously into that conversation, vindicating the victim-blamers, whether that was his intention or not. Connie is a wounded animal, still grieving for her mother, terrified of her own mortality, and blaming her father and his God for all of it; but to choose this avenue for her revenge was perhaps ultimately unwise, as it buries her within the politics outside the play itself. It lessens both her story and the stories of countless other women.


Beyond this tactical error, the script in general suffers from an inconsistency of tone and some cliched modes of dialogue and interaction, further exacerbated by Steven Yuhasz's lackluster direction. Yuhasz's staging is pedestrian at its best and outright apathetic at its worst, with characters literally stepping back when they should be pursuing their arguments, dissipating any tension before it forms. What results is a bloodless recitation of dialogue with little to no emotional urgency, no sense of discovery, or even that these characters are in the same room with each other. Adria Vitlar's performance as Connie is the one exception here, vibrating with pain and rage, desperate for love and validation, her sorrows clutched close to her. She draws the focus of every scene she's in, catching the eye and capturing the heart - which is perhaps an all more troubling fact, as she portrays neither of the two titular protagonists. But even Vitlar's fire is not enough to rescue the rest of the play, particularly after the plotting falls into another cliche, sacrificing the damaged woman to allow the patriarch to grow and change.

Much as the poetry is bursting to come out of Connie - she recites verses from memory when her own words fail her - there is an interesting play struggling to escape from its restricting confines in The Preacher and the Shrink. It just needs to figure out what it is, first.