Plot and Background
Hedda Gabler, Henrik Ibsen's 1891 classic, follows the titular character as she returns from her honeymoon, already bored with her new husband and seeking power and control over others' destinies. She is orbited by George, her smiling mediocrity of a husband; Judge Brack, a family acquaintance out for power of his own; and Eilert, a former flame - now sober, writing great works, and in love with an old classmate of Hedda's, Thea. As Hedda gathers and weaves the strands of these people's lives, she finds herself inextricably knotted in her own web. Hedda (Gabler) is produced by Wandering Bark Theatre Company, currently in residence at IRT. Wandering Bark, founded in 2011, is dedicated to exploring and adaption classical works, often with live music, multi-media design, and stylized physicality.


What I Knew Beforehand
It's vaguely possible I saw a teleplay of Hedda Gabler at some point, as the story beats felt familiar, and I definitely knew the play's final moment (and not just because of A Gentleman's Guide to Love and Murder). And I knew I would be working through the fact that Ibsen generally leaves me cold.

Play: I don't know to whom to give the most credit - Matt Minnicino's taut 90-minute adaptation, Joseph Mitchell Parks's seamless, circling staging, or the cast, largely excellent and without self-indulgent flourishes - but this production belied my usual issues with Ibsen with aplomb. The story was gripping, full of inevitability and yet fighting its own fate with a laced-in ferality. The play still doesn't quite answer the question of just how such a person as Hedda can exist, but that seems to be an intended mystery - no one, not even Eilert, grasps the fullness of her, the hidden agendas, the plans, the manipulations. Only Hedda knows, and she's not telling. The play is staged with great economy, transitioning between scenes with stylized dances, as choreographed by Brad Landers, that give more insight into Hedda's inner motivations than her behavior in polite company. If you think you don't like Ibsen, I challenge you to take the time to go see this production, and then talk to me about it. If you do like Ibsen, then you should absolutely see it, and then talk to me about it.

Cast: Valerie Redd's Hedda is the perfect cipher - inscrutable and yet utterly compelling. It is hard to take your eyes off her as she sedately prowls her parlor like a lioness in her den. Every move, every gesture, is as calculated as the low purr of her voice. Susanna Stahlmann's Thea is an ideal foil to her, fussily dressed and highly strung, with emotions constantly flaring out haphazardly - the more Thea frets, the calmer Hedda becomes. Quinn Franzen brings an engaging Byronic melancholy to Eilert, such that one can see why both women are willing to destroy so much to hold his attention. Kyle Schaefer does admirable work with George, a man constantly having circles walked round him, a man who doesn't realize he's the fool of the party. Schaefer endows him with a naive sweetness and uses excellent comic timing to sneak in his undercuts, even as everyone speaks over him. Terence MacSweeny's Judge Brack is perhaps painted in broader strokes, but he balances the leering lecher and the friendly old judge personae well. Kathleen Marsh's Aunt Julie is a sweet presence, but one wonders what she truly thinks of the goings on, beneath her proper and polite exterior.

Design: David McQuillen Roberton's gives us the Tesman parlor on a wood-paneled clock of a floor, a space that encourages its players to constantly circle each other, find the best vantage point (as well as allowing us to see private moments of characters before they've actually entered the room). The furniture, stiffly upholstered, is both attractive and forbidding - this is not a place where one can let down his guard. Jason Frey's costume design, particularly for the women, is sumptuous - Hedda in a rich royal blue, immaculately gathered; Thea in overly-laced creams, and Julie in drapier, less-showy garb. The men are well-suited (so to speak) - vests, neckwear, even spats over their shoes. The music, under sound designers Kevin Novinsky and Jordan Antonucci, is hypnotic and perfectly flavors the choreography of Brad Landers. 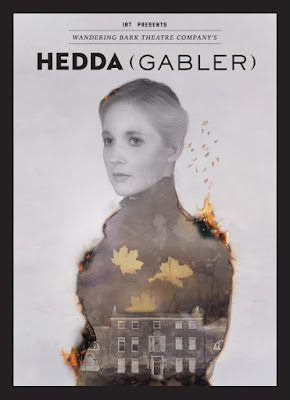