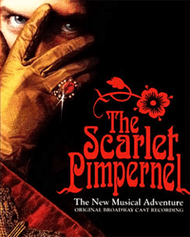 Twenty years ago, I visited my sister - then a freshman at Columbia University - for my spring break. We had a fun first-visit-to-New-York planned: Central Park, Empire State Building, New York pizza, Staten Island Ferry, and my first Broadway show. Twenty years ago, my life changed forever.

Let's be clear, I was already a theater fan. Both my parents grew up loving live theater, and they took us to a lot; as well as playing All the Cast Albums on road trips and at home (and let's not forget that fateful day Dad showed us the VHS of Into the Woods). My Mom is such an advocate of supporting live theater that we saw all the community theater my small town had to offer, some of which was great and some of which was ...  you know, not great. But I was predisposed to have my life changed, I suppose.

Seventh grade is a bad year for many people, and it certainly hadn't been a good one for me so far: nearly all my friends from sixth grade and beyond suddenly stopped talking to me (I still don't know why), my best friend and sister had left for college, and I was feeling a bit rudderless. Two big things happened that year: Mom took me to audition for my first community theater youth show, and Mom sent me to New York to visit my sister.

I'd seen, at this point, a range in quality of live theater: school shows, community theater, non-Eq tours, and the occasional quality Equity production (I can think of three: the Broadway company of Beauty and the Beast in their LA run; a lovely production of She Loves Me playing in Roanoke; and one of the tours of Les Miserables, starring the future Tony-winning Alice Ripley as Fantine). But sometimes the right thing has to find you at the right time.


My sister Rachel had already seen The Scarlet Pimpernel in the fall, on Mom's recommendation. At the holidays, she'd brought home the concept album to play for us. I knew what I wanted to see, and we had second row center seats to it (oh for the days pre-premium price, when the top cost for a ticket was $80).

I was swept away.

I didn't know voices could sound like that. I didn't know a show could look like that. I didn't know I could be this close to something. I was a young girl in desperate need of some idealism, and this was the heroic story I'd been waiting for. Percy, dismayed at the bloody chaos reigning in the French Revolution and heartbroken at the seemingly callous betrayal by his new French bride, decides that action is required, and enlists all his friends to help him.


David walked into the valley
With a stone clutched in his hand
He was only a boy,
But he knew someone must take a stand

Into valleys, into waters,
Into jungles, into hell
Let us ride, let us ride home again with a story to tell

And they do. They join him. Eleven men march forward, inspired to do good, and as the study transforms into a ship sailing the choppy waters to France, they all sing:


Someone has to face the valley
Rush in, we have to rally and win, boys
When the world is saying not to,
By god, you know you've got to march on, boys
Never hold back your step for a moment
Never doubt that your courage will grow
Hold your head even higher and into the fire we go!

I never stood a chance.

Over the next few years, my sister and I became part of our first fan community - a community hosted on geocities sites, because ... the 90s. The Scarlet Pimpernel holds a rather special place in the Broadway canon: it hit New York City right when fandoms were beginning to gather online, and so when the show was rebuffed by the New York critics (who hate Frank Wildhorn even more than they hate Andrew Lloyd Webber), the fans rallied to support the show, spreading the word online and on the streets, returning again and again to see the show, befriending the cast. And something very unusual happened: the producers saw the intense love from the fans and decided they would try to save the show. While Version One still performed, Nan Knighton rewrote the book and some of the score; they brought in a new director/choreographer as well as some new leads. The show shuttered for ten days, about a year after it originally opened. Version Two opened to much more positive reviews. And when they knew they were losing the Minskoff Theater, they retooled the show again for a smaller cast, had a small tour to test it out, then reopened with a fresh cast at the Neil Simon with Version Three. No other show has had quite the Broadway career as The Scarlet Pimpernel, and because it found us at the right time, my sister and I were there to see it.

In the twenty years since, I've see hundreds on hundreds of shows. I've found new favorite scores, directors, performers, and theatrical experiences. I love live theater. There's nothing else like it. And you never forget your first.

Thank you to Frank Wildhorn, Nan Knighton, Douglas Sills, Terrence Mann, Christine Andreas, and my family who set me up to be a junkie in the first place.