4/04/18: Yerma
What: Park Avenue Armory hosts The Young Vic's production of Simon Stone's modernized adaptation of Federico Garcia Lorca's 1934 Yerma: a woman's fixation on conceiving, and whose perpetual inability to do so poisons her pysche as well as her relationships with all of those around her.
And? I'm of two minds on this. I thought the performances were, across the board, excellent. I thought the stage craft was impeccable - like a magic trick, those scene changes. The staging concept - the characters interacting within an enclosed glass box, their voices piped out to us - gave the whole performance an air of a scientific experiment observed, or of pets in a terrarium (I did think the interstitial music was, in general, too overbearingly loud). However, I don't think I particularly like the play itself, or the story it's telling. It's not just that it's contributing to the Hysterical Woman trope; it's that I'm not sure what they intend for me to take away from what I saw. Was I affected? Yes. But the final moment is one of horror, and it comes at a moment when the main character has lost all sympathy already. Miserable People Being Miserable has never been a favorite narrative of mine.

4/05/18: Saint Joan
What: MTC's revival of George Bernard Shaw's play about Joan of Arc, a woman of conviction, courage, and integrity, one whom the world was not yet ready to embrace, and whom the world would still prefer remain a dead saint, rather than a living woman.
And? An adequate production of an excellent and moving play. I don't know that it has anything new to tell me beyond what I'd already gotten from the last two excellent productions I'd seen (National Theatre Live and Bedlam). There are a few tonal inconsistencies for me, namely that we have period costumes, but some of the performances are incongruent with that aesthetic, favoring instead distinctly contemporary inflections and delivery. Had the entire cast made this choice, it would be a statement; when only some do, it looks like carelessness. Scott Pask's scenic design is pleasing, with rows of large hanging flutes, reminiscent of a church organ, or of wind chimes. Condola Rashad is excellent as Joan, and the ensemble also includes good performances from Max Gordon Moore, Patrick Page, and Jack Davenport. 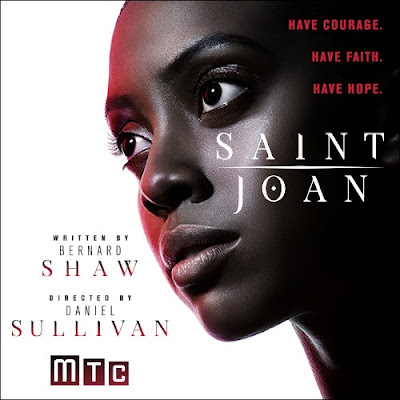