3/29/22: Confederates
What: Signature presents Dominique Morisseau's newest play, which follows two timelines/stories: Sara, an enslaved woman fighting for freedom and fending off the advances one of her enslavers; and Sandra, a tenured professor of political science at an Ivy League school, who's recently found an incendiary photoshopped picture taped to her door, and is grappling with that while fending off accusations of bias from students and colleagues, both for and against women, both for and against Black people.
And? Dominique Morisseau is fast becoming one of my favorite playwrights. Her language and character work is crystalline precise, and her stories are incisive and deeply human. She doesn't paint the world in all-evil/all-good, but treats the nuances of character while still drawing clear lines in the sand between forgivable and unforgiveable choices. And she lets the scenes play out in such a way that even if you can figure out where it's ultimately going, you still don't know everything about the journey to get there, or who these people will decide to be: their best selves or their worst. And in this particular play, with whom do they choose to collaborate, or co-conspire with? Beyond that I don't want to give too much away, as the joy and moving nature of this story lies in how it unfolds, scene to scene. But I loved it. The cast is wonderful, particularly its two centers, Kristolyn Lloyd and Michelle Wilson. It's delicately and swiftly directed by Stori Ayers, and the ambiguous combination of Rachel Hauck's plantation-cum-university scenic design and Ari Fulton's time-bending costume design are clever.
3/31/22: The Little Prince
What: A new modern dance and acrobatic adaptation of the book by Antoine de Saint-Exupery, about a young boy who travels from planet to planet, learning about the different worlds.
And? Such beauty and poetry! I wasn't sure how I'd do with a primarily dance-based piece, as I notoriously fall asleep at the ballet (I've still never seen Nutcracker in its entirety and I've tried at least five times). But this is lovely. The choreo is vibrant and a gorgeous blend with the aerial acrobatics, and the storytelling clearly aimed at that happy medium of engaging a young audience while still entrancing the adults present. Director and choreographer Anne Tournie, in collaboration with co-director, librettist, and narrator Chris Mouron craft an elegant and entertaining adaptation, still pulling at those same melancholic strands the story has always pulled, while expanding the imagination of how to tell this story on a stage. If I had one complaint, it's that they booked the wrong theater for this show. There's so much floor work, and the Broadway Theatre has little to no rake in its orchestra seating. Both the eight year old child sitting next to me, and my own less-than-five-feet-tall self had trouble seeing a good portion of the performance. However, I recall that the mezzanine has a good rake, so if you're going, aim for the mezz and you won't regret it.
4/01/22: Mr. Saturday Night
What: A new musical adaptation of the 1992 film, still starring Billy Crystal and David Paymer, with a score by Jason Robert Brown and Amanda Green, about a washed-up Borscht Belt comedian trying to jumpstart his career after he's mistakenly reported as dead.
And? Meh. Billy Crystal's a wonderful entertainer, but this show has very little to offer. Emotional beats aren't earned, the lyrics sit uncomfortably on the music, and the melodies sit uncomfortably in Crystal's and Paymer's voices. Even the video screen concept for the scenic design seems half-baked, an idea that's not fully actualized. Oh well. 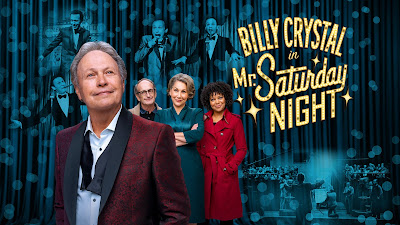