4/04/22: Alex Edelman: Just For Us
What: Jewish comedian Alex Edelman's storytelling piece about the time he attended a white supremacist meeting in Queens, NY, and how he grapples with his Jewish identity. After a sold-out run at Soho Playhouse, the show returns for a limited run at the Greenwich House Theater. (and it just got extended, so grab your tix!)
And? Wonderful, funny, moving, unique. I'm so grateful my friend Lauren told me about this so we could see it together. Alex Edelman is a great storyteller, and I'm glad his show is doing so well that it keeps selling out and then extending.

4/05/22: Birthday Candles
What: Roundabout presents Noah Haidle's new play which follows Ernestine through ninety years of birthdays, and the people she loves and loses and gains along the way.
And? I went in with my expectations in the basement (I've been burned by Roundabout too many times), but I just love this. Debra Messing is wonderful as the keystone of the show, fully emotionally present, full of love and vitality. The play's thesis, as well as its content, is a reminder that not every story needs to be epic to be important, and that making the decision to treasure the gift of an hour, of a breath, of time spent together, is just as vital to our survival. Director Vivienne Benesch does a deceptively delicate job tracing the journey of the play, with the clean but subtle transitions from birthday to birthday and year to year, as Ernestine and her loved ones go through the ritual of baking her special birthday cake. Also -- and this is super important -- Christine Jones's scenic design is a goddamn poem and I love it so much.
4/06/22: How I Learned to Drive
What: Manhattan Theatre Club's revival of Paula Vogel's Pulitzer prize-winning memory play about pedophilia and grooming, uniting its original 1997 Vineyard director, Mark Brokaw, with three of its actors, Mary-Louise Parker, David Morse, and Johanna Day. This revival was originally intended for Spring of 2020.
And? Hot damn it is a gift to see a play this well-written be this well-acted. I saw the 2012 revival at 2nd Stage where the performances didn't quite live up to the play itself, so seeing this with its original leads, masters of their craft who know their characters so intimately, is such a treat. MLP is almost sixty years old and yet you never once question that she is a teenager (or younger) trying to navigate the adult world into which she's thrust by her uncle's behavior. She brings so much nuance to the complicated power dynamic between Li'l Bit and Uncle Peck, in her physicality, her voice, the micro-expressions on her face. Her performance as Li'l Bit has long been on my list of "if I could travel in time, I'd go see that one" -- how cool is it that she's doing it again for those of us who missed it the first time? 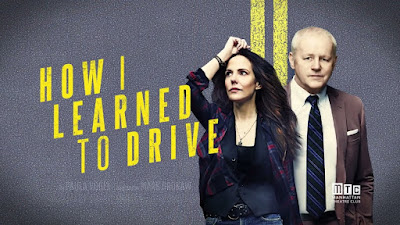 4/07/22: for colored girls who have considered suicide / when the rainbow is enuf
What: Ntozake Shange's 1976 landmark piece returns to the Booth theater. A kinetic combination of music, dance, rhythm, and choreopoem, the play follows seven Black women (Lady in Red, Lady in Yellow, Lady in Brown, Lady in Green, Lady in Purple, Lady in Blue, Lady in Orange) who have suffered and who survive. Through the telling of their stories, the seven women form connections that sustain. This production played at the Public in 2019, directed by Leah C. Gardiner and choreographed by Camille A. Brown. For its Broadway transfer, Camille A. Brown is now both director and choreographer.
And? I loved it. Thrilling and heartbreaking by turns, a play that frequently depicts the emotional and physical violence inflicted on Black women, but reinforces the strength they derive from their female bonds, from their community. These women onstage support and validate each other, even in such simple things as the other women signing to the Lady in Purple (played by Deaf actress Alexandria Wailes) in ASL to ensure she is not excluded from the conversation and communal space (also, my god, Wailes is an extraordinary physical performer and dancer with such presence). The entire cast is extraordinary, but I do also want to pay special note to Kenita R. Miller who, as the Lady in Red, has the most gutwrenching story to tell near the play's climax, and carries the story through without flinching away from the agony of it. 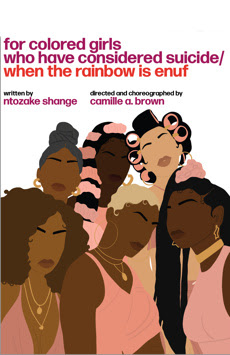 4/09/22: Cyrano de Bergerac
What: BAM hosts the new Martin Crimp/Jamie Lloyd adaptation of Edmund Rostand's play about catfishing (I'm sorry, I couldn't help myself), starring James McAvoy.
And? We are in the blessed state of being five for five this week. Every single show has been worthwhile. Martin Crimp's new adaptation of Edmund Rostand's classic play updates the verse to spoken-word poetry and includes an onstage beatboxer (Vaneeka Dadhria), and -- once you get used to the quick rhythm of it, and your ears get up to speed -- it largely works, especially as a tool to highlight Christian's ineptitude at verse. My big complaint, before we get to how great the cast is, lies with the director Jamie Lloyd. The staging is largely abstracted and de-literalized: no swords, no props, only a specific handheld mic to symbolize the letters being read or written. It often functions like a radio play, with the actors facing forward and saying lines which indicate movement, without actually activating that movement. It's similar to Daniel Fish's Oklahoma! revival, as well as to some of John Doyle's work; and while abstraction and deconstruction can sometimes work very well (and sometimes in this production do work very well -- the spectre of Christian during Act V being a prime example, or even the simplicity of the balcony scene in Act III), I don't like when they end up obscuring the actual story being told, especially for anyone watching who doesn't already know the story (and I have confirmed first-hand accounts of this being an issue with both this production and with Fish's Oklahoma!). So that's an issue.
The cast, though, oh the cast. James McAvoy (if you ignore his objective beauty) is such a wonderful Cyrano--heroic, poetic, sharper-tongued than anyone around him, a mind running faster than his mouth can even speak, turning from fragile hope to abject agony, then masking it all under bravado before anyone can suspect. And, after all his frantic activity of outsmarting anyone near him in Act I, to have him sit absolutely still and speak the seduction of Act III quietly and earnestly, is just *chef's kiss*. Evelyn Miller is one of the best Roxanes I've seen, fiercely intelligent, independent, and practical, while also glowing with the fresh happiness of new love. Eben Figueiredeo is a puppyish Christian, sweet and a bit foolish, confused and trying desperately to keep up. His ache at realizing he's lost his love is a stabbing pain that reverberates for the rest of the play.
tl;dr this is a great production if you already know Cyrano de Bergerac; if you don't, I suggest reading a plot summary in advance of seeing the play.
Posted by Zelda Knapp at 9:00 AM