Weekly Margin 2022, W20: Our Brother's Son, The Minutes, The Bedwetter, The Cherry Orchard

5/03/22: Our Brother's Son
What: A new play about a family grappling with old secrets and a new medical crisis.
And? The crux of the conflict of this play is that one character who has not only failed to endear himself to his family, but has also betrayed some of them, now needs a kidney transplant, and that some of his wronged relations are viable donors--donors who are not sure they want to donate a kidney to save his life. I saw this play the day the SCOTUS draft leaked. And all I could keep thinking about is that right now you cannot force a person, even a corpse, to give up any part of their body to save someone else. It is a crime to do that. Unless, of course, the person has a uterus, and then all rights to body autonomy can be forfeit. That's what our Supreme Court is trying to do. To deny people with uteri the same rights as a corpse. We are still still paying for the 2016 election and the travesties it has wrought, and we're making so many young people who had no hand in that election pay too. This is real tangible damage and I feel as helpless and furious and depressed as I did that November.
"Why aren't you talking about the play, Zelda?" Because it was not great, Bob. It was clumsily written, clumsily directed, clumsily acted, and the biggest choice in the scenic design was such a statement, but I don't think it was a statement connected to the content of the play. Also, even if it was a throwaway line, it did feature a white man explaining to the one person of color onstage that Thanksgiving celebrates a genocide, and her being confused, and that leaves a pretty bad taste in the mouth.
Listen, if my past almost-twenty years of NY theater-going has taught me anything, it's taught me that art is subjective, that you can't removed live performance from the context of the world hosting that performance, and that the most important element any of us can bring to our subjective experience of art is ourselves and who we are in that moment. 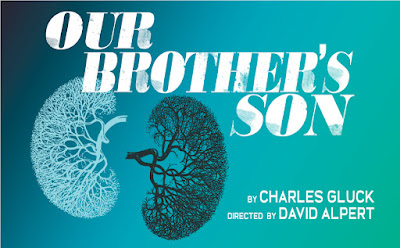 5/05/22: The Minutes
What: Another return of a show whose initial run was cut short by the onset of the pandemic in 2020. Roundabout presents the Broadway transfer of Steppenwolf's production of Tracy Letts's play about the town council of Big Cherry conducting their weekly meeting while being strangely cagey about the events of the previous week's meeting. Very underbelly of small town (mostly) white America.
And? Letts's tone for this is simultaneously tense and folksy, as newcomer councilmember Peel tries to unravel what happened at the meeting he missed but keeps being rebuffed by every other member, each with their own agenda. I know part of the name of the game here is colonialism and appropriation (the pageantry of the councilmembers re-enacting Big Cherry's dubious origin story being the centerpiece of that narrative) but even the moments within that that are meant to induce knowing chuckles still leave a bad taste in the mouth. Of course, as the mystery finally reveals itself, that bad taste becomes the deliberate top note, if you will (Jesse Green keeps using this metaphor in his reviews this season and I'm stealing it). And I'm still reckoning with what to do with the (extremely spoilerly) denouement. Great cast, especially Austin Pendleton as the bewildered misanthrope Oldfield, and understudy Joshua David Robinson as the eely Blake.
5/07/22: The Bedwetter
What: Atlantic presents a new musical from Sarah Silverman, Joshua Harmon, and the late Adam Schlesinger, adapted from Silverman's memoir about her childhood.
And? Really good work, especially the writing combo of Silverman, Harmon, and Schlesinger. The songs are all catchy and consistently funny, with Schlesinger's pitch-perfect knack for pastiche on full display. Young Zoe Glick is a great Sarah, with her long-limbed awkwardness and wide-grinned foul mouth. I don't quite get the sense that this production has the momentum to take it to a commercial run, though perhaps Silverman's name (and Bebe Neuwirth's presence as Sarah's Nana) could be enough to push it over the line. It's a good fun time, and the program has a touching tribute to Schlesinger, who died of COVID-19 in April 2020, and yes I'm still upset he's gone. 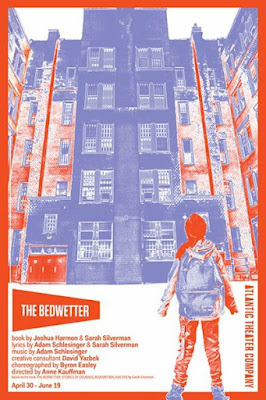