Weekly Margin 2022, W21: The LightHouse Series (Group 1), Harmony, The Vagrant Trilogy, Into the Woods, Try This On For Me

5/09/22: The LightHouse Series (Group 1)
What: SoHo Playhouse's new play competition (I'm only seeing Group 1, which includes the plays What I First Desired, In a Relative Way, Tuam, The Gospel of Efunroye, A Ladder to the Moon, and Gayby).
And? An interesting combination of styles and storytelling, from noir to hip hop to fragmented narrative to historical speculation to poetic fantasy to stand up comedy.
5/10/22: Harmony
What: National Yiddish Theatre Folksbiene presents Barry Manilow and Bruce Sussman's new bio-musical about the popular six-man German singing group, the Comedian Harmonists, whose success was cut short when the Nazis rose to power.
And? It felt like it was written by someone who knows nominally how Musicals About Real People are supposed to go, with workhorse dialog to get us from A to B, and then another song, applause, rinse, repeat. But for a true story with stakes this high, the scenes and songs just feel inert, the character choices generic. The singing is all truly excellent, which we definitely need for a show about a tight six-part harmony group, and even some of the dancing is fun, but overall I was underwhelmed.
5/13/22: The Vagrant Trilogy
What: The Public Theater presents Mona Mansour's three-act play about Adham, a Palestinian academic who is in London when the Six-Day war breaks out. He must make a choice whether to try to stay in London and perhaps never return home, or go home to a Palestinian settlement in Lebanon, and perhaps never be able to leave again. Acts Two and Three explore the alternate realities of each choice.
And? A bit plodding and overstuffed, but some interesting ideas and heartbreaking consequences. Each version of Adham believes he has made the wrongest choice he could, not recognizing that he at least has what the other Adham desperately misses. It was an impossible choice with no happy ending. Fantastic scenic design by Allen Moyer.
5/14/22: Into the Woods
What: City Center Encores!'s starry concert staging of the Sondheim-Lapine fairy tale mashup.
And? In a surprising twist after Encores!'s controversial revisals this season, their presentation of Into the Woods takes its text not from any of the author-sanctioned rewrites ("Our Little World," the child-as-narrator frame, or the 2002 revival song rewrites), but from the original 1987 Broadway edition. Which means I have very few complaints. Sure, not every actor choice was my favorite, but there were so many good choices to be had, a feast of them, that we all dined well. The entire cast is in wonderful voice (Heather Headley, Jordan Donica, and Denee Benton, y'all), many in top comedic form (Julia Lester, Ann Harada, Gavin Creel, Neil Patrick Harris, and dark horse Sara Bareilles), and on top of that a puppeteer (Kennedy Kanagawa) manipulating James Ortiz's delightfully designed creatures (and giant). And then the full orchestra under Rob Berman's wonderful direction, his final collaboration with Encores!. It's one of the hottest tickets of the season, and for good reason.
Into the Woods was not only my first Sondheim, we're pretty sure it was my first full-length musical. It's a show that's meant many things to many people over the years. When I was very young, I was taken with the way the Baker and his Wife tied together the other fairy tales, and then how we learn in the second half that there are real consequences when we hurt others. When I got a little older, I prided myself on realizing the woods were a metaphor for growing up. Later I came to appreciate how much the show is reckoning with parent-child relationships, with the messiness of imperfection. With this production, and in my current context, I found myself thinking most about communal responsibility (it's pretty messed up that no one helped Jack's Mother clean up the Giant's body), the failures of government to do that which they claim to do--protect its citizens from harm--and how we decide who counts and who doesn't. The Baker talks Jack out of taking vengeance on the Steward for murdering his mother (hey-o government violence against its own citizens), all while the two wait to kill the Giant's Wife, who is here wreaking destruction after Jack took advantage of her hospitality, stole from her home and murdered her husband. The Giant's Wife must be stopped, must be killed, but we must trust that the Steward will meet consequences in some other way. Little Red points out that the Giant is a person, and shouldn't we show forgiveness, and I don't have an answer for her. Cinderella's answer itself is a non-answer, pivoting to sing about not being alone, even as both of Little Red's maternal figures have been killed.
Anyway, it's what I've been thinking about. This is a great show. I cried a few times. I miss Sondheim.
5/15/22: Try This On For Me
What: A new immersive experience from The New York Neo-Futurists, a
And? really cool. full review here. 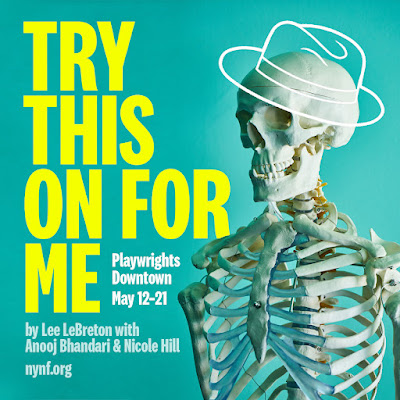