4/26/22: Golden Shield
What: MTC presents Anchuli Felicia King's play about two estranged Chinese American sisters who go after Onus, a multinational tech company who helped build China's oppressive internet censorship program, called the Golden Shield Project. Inspired by real class action lawsuits brought by Chinese citizens, King's play confronts the challenge of translation, not only across language and culture, but across individual people's boundaries and emotional defense systems.
And? Really just such a cool piece of theater. Sharply written, with a character called The Translator (played with charisma and intelligence by Fang Du) serving as our Emcee to guide us through not only the cultural challenges of translating Mandarin to English (he begins by explaining that proverbs are particularly difficult to communicate full connotation and meaning), but also legal jargon, tech jargon, and the things these two estranged sisters are somehow unable to say to each other. His use throughout the show is multifaceted: sometimes interpreting for the English speakers a scene entirely in Mandarin or--most powerfully--a scene in complete silence, where each gesture and look has layers of meaning. And of course, he runs into the challenge we all face, which is that some things quite simply can't be translated. Some things we cannot make ourselves say. A top tier cast across the board (I was quietly excited to see Max Gordon Moore again, as he always makes interesting choices; here he is a self-righteous villain, slimier and smaller than he will admit to himself), especially the aforementioned Fang Du as The Translator, and Michael C. Liu's heartbreaking portrayal of Li Dao, the only plaintiff willing to testify to the torture he suffered during his incarceration. My one big complaint is that, at least the night I saw it, Nathan A. Roberts's sound design overpowered the voices of the actors (who, even in the intimate space at City Center Stage I, were all miked). I hope this gets sorted before opening. 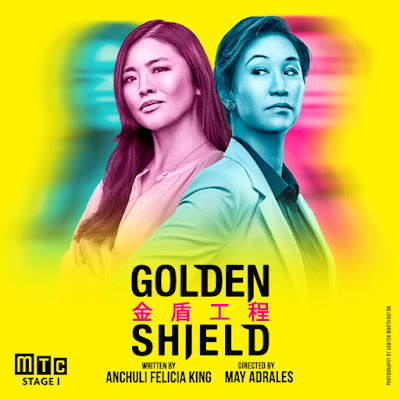 4/28/22: H*tler's Tasters
What: The Off-Broadway transfer of Michelle Kholos Brooks's award-winning play about a trio of young women whose job is to taste all of Hitler's meals to ensure he is not poisoned. Flush with contemporary anachronisms (the girls are constantly vying for the perfect selfie), the play examines the indoctrinated hate and the naive powerlessness of the Third Reich's most disposable commodity, even when considered "Good German stock."
And? In the talkback for the show, the panelists discussed the disposability of these young women, and an audience member pointed out that society considers older women (specifically older female actors) even more disposable. It made me readjust my lens on how the young women are treated: it's not just that they're disposable, it's that they're consumable--consumable until they're used up, and then they're disposed of. And in a play which features a thrice-daily ritual leading up to the tasting meal and the hour timer to see if the food is poisoned, consumption is the name of the game. In the spans of waiting, the girls discuss other matters of consumption: movie stars, missing neighbors, a striking red coat found "abandoned" in the woods, bearing a shadow of the star patch no longer attached. The play doesn't quite ask us to feel kinship with these girls, who gleefully swoon over the Fuhrer and celebrate the cleansing of the Fatherland, but it does allow a hint of compassion in, for the abject helplessness of their own situation. This job wasn't voluntary, and when one girl disappears they don't know how or why she did. But with their complicity never forgotten, we are instead reminded that fascism always inevitably consumes its own, once it's fed on the "enemy." Terrific production directed by Sarah Norris, and featuring a female-led creative team, balancing the WWII era context with contemporary music and language, to remind us that one dictator gone doesn't mean fascism is far away even now.
4/29/22: A Case for the Existence of God
What: Signature presents Samuel D. Hunter's new play about the uneasy friendship that forms between two single dads as one tries to help the other secure a loan for a land purchase, and as they both confront their anxieties about parenting (my god, this oversimplification makes the play sound whatever, but it's so good).
And? Oops I'm supposed to keep the editorial to this part of the write up. Stunning work from both Will Brill and Kyle Beltran, as they perform a delicate dance of reaching out and pulling back, unsure what to trust but recognizing enough in the other to see what could be a vital connection. As the play goes on, the life-changing importance of that connection becomes clear as crises come not single spies, but in battalions. Arnulfo Maldonado's deceptively simple but vast scenic design isolates the two in an island of a cubicle, surrounded by an empty void that is perhaps the empty plot of land Ryan wants to buy, or perhaps the isolation in which each man finds himself. The subtlety of Tyler Micoleau's lighting design and Christopher Darbassie's sound design gently guides the audience through the quietly shifting scene transitions under David Cromer's invisible direction: the moments between scenes are but one or two breaths, the actors not leaving their chairs, the chairs not venturing past the border of the cubicle, and yet we are in the office, in a living room, in a park. And though the characters are dealing with impossibly high stakes--whether or not Ryan can secure a loan to purchase land, on which he's hung his hopes for the future and building a worthy life to raise his daughter; whether or not Keith will be able to adopt the child he's fostering, and cope with his anxieties over it--the crux of the aching poignancy of the play is also whether or not these two men will be able to finally feel safely seen by each other. What's that all got to do with the existence of god? Well, I think the answer lies in the final scene, but it's a Big Damn Spoiler, so ... you'll have to see for yourself.
4/30/22: Wedding Band
What: TFANA's production of Alice Childress's play about an interracial couple in South Carolina during the first World War, and the resistance they meet from both white and Black communities.
And? It's hard for me to properly evaluate this show, because I couldn't hear about a fourth of it. Director Awoye Timpo and scenic designer Jason Ardizzone-West present the show in alley staging but sound designer Rena Anakwe provides no miking of any kind, and the cast is inconsistent at projecting their sound enough that everyone can hear their lines, even when they're facing away from us. This issue is especially pronounced for those sitting at the outer edges (Julia and Herman's final scene, for example-- Thomas Sadoski's Herman had his back to my seat and I missed most of his lines). I really like Alice Childress's writing--Trouble in Mind was a real highlight of the Fall season--but I hate that I missed so much of her play when I saw this one. Positives: Brittany Bradford is a tour de force as Julia Augustine; Qween Jean's costume design and Nikiya Mathis's hair and wig design are beautiful works; Childress once again proves that none of the conversations about race that white America is having now are new conversations, and that we should have listened so much better, so much earlier. 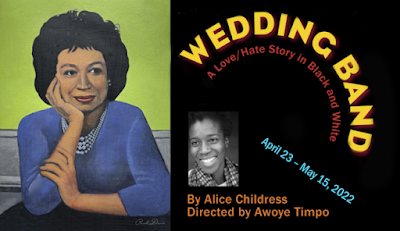