9/28/21: Is This A Room
What: The Broadway transfer of the celebrated Vineyard production, taken from the actual transcript of the interrogation of Reality Winner regarding an information leak.
And? I'm still puzzling through what I actually thought of this play. It's for sure an interesting experiment, including the slightly tinny sound design by Lee Kinney and Sanae Yamada, to remind us that this is taken from a transcript of a recorded conversation. Further verisimilitude is achieved by the inclusion of random asides that go nowhere, sudden topic shifts and non sequiturs, and other conversational sandpits that occur in real life but less so in structured drama. So it's interesting, and strange, and unnerving, especially as the two interrogators shift from friendly chat to frightening threat, as the two men tighten the net around Reality, boxing in a young woman in cutoff shorts and a loose white shirt. I was also especially excited to see former classmate Emily Davis's much-lauded performance, and she did not disappoint. She's so good at sinking into the role that you forget she's acting.

10/01/21: Dana H
What: Another Vineyard transfer, running in rep with Is This A Room, Lucas Hnath's newest work is a documentary play about the harrowing events in his mother's life in 1997.
And? My initial impulse was to go back and rewrite my Is This a Room section above, knowing now how these two plays are not only in rep, but also in conversation with each other, but I decided to let it stand, as an unfiltered reaction to the first show on its own. What's interesting about how these two plays work is they're both somewhat deconstructed attempts at documentary. While Room takes every line from the transcripts of the interrogation of Winner and plays with our senses to ratchet up tension, or to disassociate with Winner out of the reality she is trapped in, Dana comes from interviews conducted with Hnath's mother by his friend Steve Cosson--and uses the tapes of the interview for the play's audio, with actress Dierdre O'Connell lip-synching to the tape. It sounds limiting but it's instead quite liberating (as well as shutting down arguments against Samuel Beckett's prescriptive stage directions as being too confining for individual artistic expression). O'Connell's precise fidelity to Dana's words, inflections, and pauses create just enough dissociative distance to protect (in my interpretation) both performer and Dana herself from fully living in the reality of her horror twenty years previously. They also make that reality inescapable for the audience. We must sit in silent witness. We are the attention finally being paid. It's harrowing, it's devastating, and I'll warn you now it's not exactly healing. But as she speaks of her work as a hospice chaplain, of standing witness to people as they slip away from life, of the importance of her work, of the extreme empathy it demands, she asks without asking that we offer her that same empathy. She is still alive as she tells this story, but the woman she was before 1997 is gone, and this is how she died.
If you were to pick only one of the two Vineyard/Lyceum plays to see, I'd say Dana H is the one, BUT I would also say that I think both plays are so much richer for seeing them in each other's context. Room primed me to see Dana; Dana taught me how to revisit my night at Room. [Warning now, I kept my review vague, but the content of Dana H contains discussions of abduction and assault, both physical and sexual. Please take care of yourself and decide what you feel safe experiencing.] 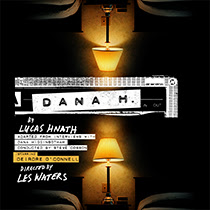