10/08/21: Thoughts of a Colored Man
What: Playwright Keenan Scott II makes his Broadway debut with a play about what it means to be a Black man in the 21st century, spending one day with seven men as they pursue their hopes and grapple with their demons.
And? I loved it. I loved it so much. Dynamic and poignant, deeply personal and universal, heartbreaking and uplifting. All the goodies. It's such a potent mix of naturalistic dialogue, slam poetry, and even music, and each character is painted so carefully. Even with each man's name in the program listed as representing a core emotion--Love, Happiness, Wisdom, Lust, Passion, Depression, Anger--they none of them feel like symbols, but like real men trying to be the best versions of themselves. Add this to your must-see list. 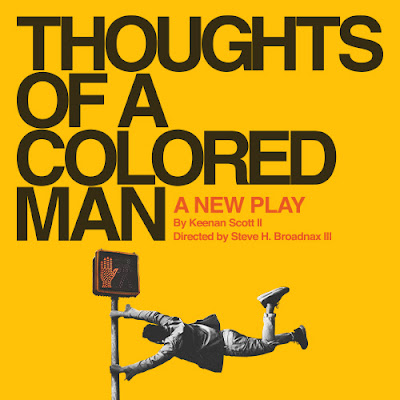 10/09/21: Chicken and Biscuits
What: Circle in the Square hosts Douglas Lyons's comedy about mourning, a take on "Guess Who's Coming to Dad's Funeral."
And? It was okay? It was nice to be in a theater full of laughter again. But a lot of the jokes or please-clap lines sound canned, like they could have been lifted from any sitcom script. And anyone who reads my blog knows I have strong opinions about the virtues of an arena or thrust stage, and how they can expose a director's weakness. Zhailon Levingston is working hard to keep the movement kinetic, so that no part of the audience is stuck looking at the back of someone's head for too long. But too often this movement feels like wandering rather than purposeful, and leaves actors who normally fare well on a proscenium looking a bit lost. Ebony Marshall-Oliver and Aigner Mizzelle are delightful as a mother-daughter team who can't help but speak their mind. 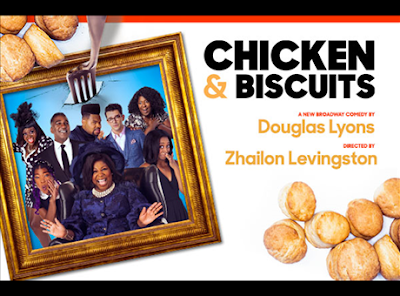