10/20/21: Girl From The North Country
What: A transfer from The Public Theater, a new jukebox musical using the songs of Bob Dylan, about an assortment of personalities in and around a boarding house in Duluth, Minnesota in 1934.
And? I have so many questions. And, since Conor McPherson both wrote and directed this show, I'm directing them all to him:
Jay O. Sanders and Todd Almond and Mare Winningham are great. Most of the cast is good. The vocal arrangements and orchestrations are beautiful. But what was that, Conor McPherson?
10/21/21: Caroline, or Change
What: Roundabout's London-import revival of the Tesori-Kushner musical about a Black maid in Louisiana "in 1963 or 4," and her uneasy friendship with Noah, the young son of the Jewish family who employs her.
And? THIS IS SO GOOD. I'm so appreciative that they aren't trying to recreate the original production (which I also loved) but are still staying true to the story being told (*coughIvovanHovecough*). All the design elements are working in concert with each other (those costumes! the sound design! the lighting! and the set! At first I was worried about the set design, because they weren't always activating the turntable in ways that made it seem a necessary element, and because sometimes parts of the set seemed to be in the actors' way, but by the end of the show I was won over: the design isolates Noah beautifully, makes clear status statements while centering Caroline, and the resolution of all the tensions created by these spaces actually made me gasp. Beautiful). They're also leaning more into the awkwardness of the well-meaning-but-clueless liberal white person inserting themself into Black spaces--in young Noah wishing to be part of Caroline's family and imagining they talk about him, in Noah's new stepmother Rose trying to bond with Caroline, and in Rose's father thinking he knows best how Black people should demand equality--in a nuanced way. The cast is wonderful (though I have to wonder how John Cariani, who as far as I can tell is a gentile, has made such a career playing Jewish men; he's all right here, but less successful than in past performances I've seen from him), especially Sharon D. Clarke, in shining stoicism as Caroline, her deep voice and stern face a grounding and compelling presence for the whirring energies around her. Kevin S. McAllister also makes an especially good impression with his I-could-listen-to-it-for-hours voice and sly physicality. If I had one small complaint (and it is small), it's in the shape they give to Caroline's big second act aria, "Lot's Wife." In the original production, Caroline's rage overwhelmed and expended all her energy, so that when she turned suddenly to grief, asking God to murder her, it was all she had left inside her; here, Caroline's anger peak is a moment of triumph and met with applause, and the actor has to then physically shift from that moment to the moment of quiet despair, like a switch being flipped. I hope the director realizes he can sacrifice the midsong applause moment to achieve a better organic journey for Caroline.
But like, that's my one issue. I love this production. I'm so pleased it's as good as I hoped it would be, especially after the disappointment the night before. 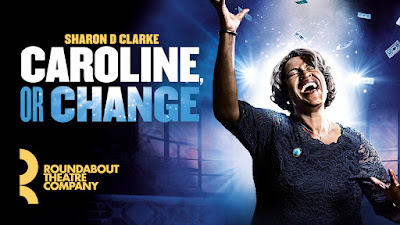